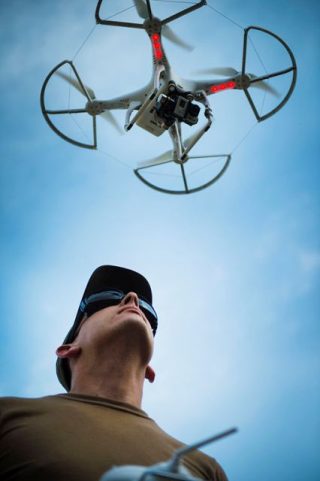 Drones will no longer be permitted to fly higher than 90 metres, within 75 metres of any buildings, vehicles or people, or within nine kilometres of an airport

OTTAWA—The federal government is bringing in strict measures and fines for anyone who flies a drone too close to an airport or plane.

Transport Minister Marc Garneau unveiled restrictions March 16 to curb the number of incidents in which recreational drones have come too close to planes, which has more than tripled since 2014.

Garneau says the government wanted to make the changes before a drone hits an airplane and causes a catastrophe.

“That’s the kind of nightmare scenario that keeps me awake at night as your transport minister,” Garneau said at Toronto’s Billy Bishop airport, where he was accompanied by law enforcement officials and representatives from airlines, airports and pilot associations.

Garneau said that until now, Transport Canada had only provided guidelines on drone use without any penalties or regulations attached. Garneau said the new rules that come into effect today are an interim measure until formal regulations are enacted, likely in June.

People who want to fly a drone should follow rules, just as pilots do when operating a plane, Garneau said.

“Secondly, those objects that are being controlled can sometimes, if they fail or they’re used improperly, can do damage simply by falling out of the sky and we have had incidents of that.”

Under the new rules, the government will require all recreational drone operators to mark their drone with their contact information and forbid their use at night or in cloudy conditions.

Drones will no longer be allowed to fly higher than 90 metres, within 75 metres of any buildings, vehicles or people, or within nine kilometres of any airport.

It will also be illegal to fly a drone in controlled or restricted airspace, or within nine kilometres of a forest fire, over an emergency site where police or first responders are involved, or over an open-air area where people are gathered.

The rules don’t apply to commercial, academic or research drone use.

Garneau said the new rules should go a long way to ensuring safe drone use and won’t harm growth in the drone industry.