The provincial government says the first order of business when the legislature resumes sitting will be an all-party debate on a motion backing Premier Rachel Notley's fight with B.C. over Kinder Morgan's Trans Mountain pipeline 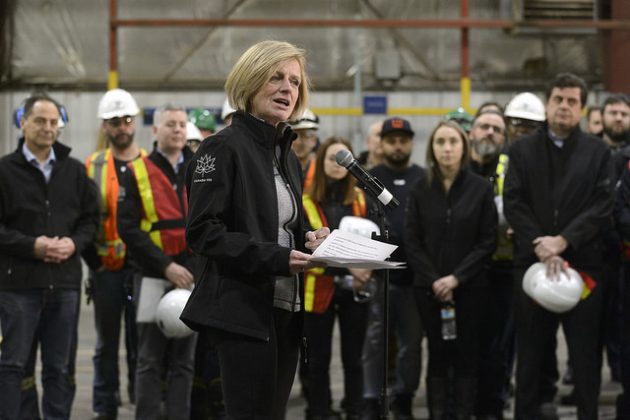 Notley and her NDP government will be calling on Prime Minister Trudeau to take whatever lawful means necessary to get the Trans Mountain pipeline expansion completed. PHOTO: Chris Schwarz/Government of Alberta

EDMONTON—Alberta politicians are crossing swords over the best way to speak with a unified voice about the fractious Trans Mountain pipeline issue during the spring sitting of the legislature.

Government house leader Brian Mason says the first order of business when the legislature resumes sitting will be an all-party debate on a motion backing Premier Rachel Notley’s fight with British Columbia over the pipeline.

“The Trans Mountain pipeline expansion is in the best interests of the economy and the environment. It will create jobs both in this province and across Canada,” Mason said Wednesday.

“All members of the house will be given a chance to express confidence in our efforts to get this vital project underway.”

The sitting begins Thursday with a speech from the throne. The Trans Mountain motion is to be put forward Monday by Notley.

The motion renews Alberta’s call on Prime Minister Justin Trudeau and his government to take whatever lawful means necessary to get the pipeline expansion completed.

It also calls on politicians from all parties to “support the government of Alberta’s fight on behalf of Albertans’ interests to ensure the lawfully approved Trans Mountain Pipeline expansion is built.”

Jason Nixon, house leader for the Opposition United Conservatives, initially said the motion appeared to be something his caucus could support. But late Wednesday afternoon, he sent a letter to Mason asking for changes to the wording.

“I would request that we meet at your earliest possible convenience to discuss a mutually agreeable text for the motion,” said Nixon, who did not specify what he was seeking.

The United Conservative Party has supported getting Kinder Morgan’s pipeline built, but has disagreed at times with how Notley’s NDP is waging the fight.

Alberta Party house leader Greg Clark said that caucus will probably support the motion, but will discuss it in more detail in the days ahead.

“I’m encouraged by some of the actions the NDs have taken on this file,” said Clark. “I’m not convinced that they’ve done enough soon enough. But it’s a start.”

The pipeline battle began in January when B.C. Premier John Horgan’s government said it would not allow any increased shipments of Alberta oil through the province until it could do further studies on oil-spill safety.

Notley called the move a back-door attack on Trans Mountain and noted that only the federal government can dictate issues concerning interprovincial pipelines.

She banned B.C. wine from Alberta and threatened further retaliatory measures. But she lifted it after Horgan said he wouldn’t enforce his ban and would instead take the matter to court for a jurisdictional ruling.

United Conservative Leader Jason Kenney has questioned whether Notley should have lifted the wine ban. He says the battle for Trans Mountain is shifting, but continuing, and Alberta needs to keep the pressure on.

Kenney called for an emergency meeting of the legislature a month ago to get Alberta politicians to speak with one voice. Notley dismissed the idea at the time.

The Trans Mountain expansion would triple the amount of oil flowing from Alberta to the port at Burnaby, B.C.

Alberta crude is selling at a discount because pipeline bottlenecks drive up costs and prevent Alberta from fetching better prices in overseas markets such as Asia.