The federal government aims to make the controversial purchase of 18 jets official by year's end. Critics slammed the deal as a "Band-Aid solution" 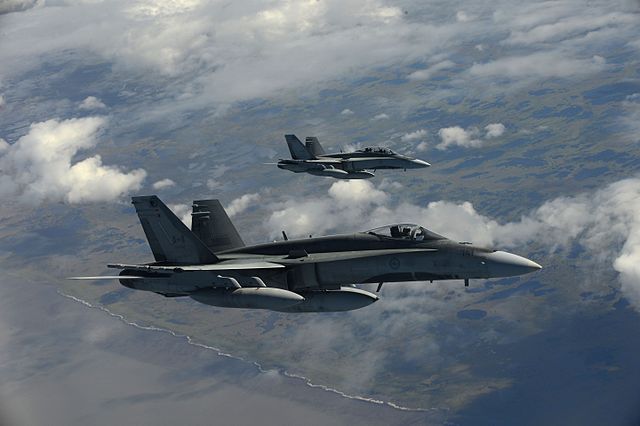 OTTAWA—The Liberal government has taken the next step towards buying 18 Super Hornet fighter jets on an interim basis, a purchase it hopes to make official by year’s end.

The government sent a letter to the U.S. government March 14 outlining exactly what it needs in the warplanes, when it needs them, and what type of economic benefits Canada expects in return.

Aerospace giant Boeing will use those requirements to draw up a formal proposal by the fall, with the government hoping for a contract by the end of this year or early in 2018.

The Liberals have said any deal will be contingent on getting the Super Hornets at the right price, at the right time and with the right industrial spinoffs for Canada, all of which is to be laid out in Boeing’s offer.

“We will assess whether an interim Super Hornet fleet purchase will help ensure Canada remains a credible and dependable ally for many years to come,” Defence Minister Harjit Sajjan said in a statement Tuesday.

The agreement must also be approved by the U.S. Congress.

Boeing spokesman Becky Yeamans said the aircraft giant, whose defence and aerospace division is based in St. Louis, Mo., is ready to start working to respond to the government’s request for a formal proposal.

“We believe the Super Hornet is the best fit for Canada, with low acquisition and sustainment costs, advanced capabilities, and economic benefits for Canadian industry,” Yeamans said in an email.

The government announced in November its plans to augment Canada’s aging CF-18 fleet with the new Hornets until a full competition to replace the CF-18s can start in 2019.

The Liberals say the Super Hornets are necessary because the air force doesn’t have enough jets to meet the requirement, implemented in September, that it be ready to defend North America and take part in NATO operations at the same time.

But the Conservatives and a number of retired military officers, including former air force commanders, have warned that an interim fighter fleet will be more expensive in the long run.

They have called on the government to immediately launch a competition to replace the CF-18s, saying there is no reason to wait until 2019.

“It has taken the Liberals five months to make this request—five months that could have been used to launch an open and fair competition to actually replace our CF-18s,” Conservative defence critic James Bezan said in a statement.

“Instead, the prime minister has delayed that process for another five years and is planning to spend billions of dollars on a Band-Aid solution that is not in the best interests of Canada or our allies.”

But experts say they will need to find additional money to replace the CF-18s, either through the Liberals’ new defence policy or by cutting some other projects.

A 2014 report by National Defence’s research arm, meanwhile, dismissed the idea of operating an interim fleet of fighter jets because of the “significant additional costs” it would incur.

That report has since been removed from the department’s website.