Feds have set aside money for interim Super Hornets, but won’t say how much

The Liberal government unveiled a controversial plan to buy the fighters last year, but an still-unfolding trade battle between Boeing and Bombardier has complicated the deal 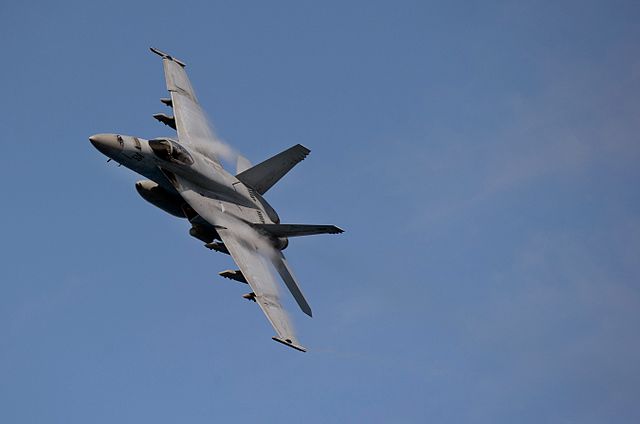 Some public estimates have pegged the cost of the fighters at around $2 billion just to buy the planes, and several more billion to maintain and operate them. PHOTO: James R. Evans/U.S. Navy

OTTAWA—National Defence has an idea of what it will cost to buy and operate 18 Super Hornets on an interim basis and has even set aside money to make the purchase—it just isn’t saying how much.

Questions about the cost of the fighter jets have figured prominently since the Trudeau government announced its intention to buy the planes as a stop-gap last November.

In an interview with The Canadian Press, National Defence’s chief financial officer, Claude Rochette, said his staff members were ordered to come up with a cost estimate for the Super Hornets at that time.

The exercise ran in parallel with the much larger effort to cost out the Liberals’ new defence policy and included help from a team of experts from accounting firm Deloitte.

“The government asked us to look at options, but in particular Super Hornets. So 18 Super Hornets,” Rochette said.

“That (Deloitte) team came from the U.S. and they (had) worked directly with Boeing. So they had access to information, and they had done costing before.”

Officials assessed the expected cost to not only purchase and fly the planes, he said, “we have also taken into account the disposal, what would be the residual value of the jets. So we have all that.”

Yet there was hardly any mention of the interim fighter jets when the defence policy was unveiled in June with a promise to invest an extra $62 billion in the Canadian military over the next 20 years.

Most of what was written about fighter jets instead focused on an eventual competition to replace Canada’s existing CF-18s with 88 new planes, at a cost of between $16 billion and $20 billion.

The policy also revealed the cost of many other planned military procurement projects, including estimates that replacing the navy’s 12 frigates and three destroyers will cost up to $60 billion.

What little was written about interim fighter jets did not include a dollar figure.

Rochette insisted the policy does include money for interim fighters, but that he couldn’t reveal how much because the government still hasn’t decided to move ahead with the purchase.

National Defence spokesman Dan Le Bouthillier said the department is also waiting for more reliable data from the U.S. That information was expected this week, but it has since been delayed.

“In order to provide accurate and reliable costing information, Canada requires additional information from the U.S. government,” Le Bouthillier said in an email.

“Only then will we be able to determine whether we can obtain an interim fighter with the capability we need, in the time frame we need it, and at an affordable cost. It’s part of the analysis we do to allow government to make a final decision.”

Some public estimates have pegged the figure at around $2 billion just to buy the planes, and several more billion to maintain and operate them, but Rochette would not confirm those numbers.

The decision whether to buy the Super Hornets is expected to ultimately hinge on the results of a trade dispute between their U.S. manufacturer, Boeing Co., and Canadian rival Bombardier.

The U.S. Commerce Department on Sept. 25 will present the results of its investigation into whether Bombardier sold its CSeries passenger jets at an unfairly low price with help from federal subsidies.

An adverse finding could result in fines or tariffs on Bombardier, but could also prompt the Liberals, which have criticized the investigation, to walk away from interim Super Hornets.

The Trudeau government announced in November its plan to purchase the planes to temporarily fill a critical shortage of fighter jets until a full competition can be run to replace the aging CF-18s.

The government said at the time that the Super Hornet was the only aircraft able to meet its immediate requirements, including being a mature design compatible with U.S. fighters.

Many defence experts, including 13 retired air force commanders, have criticized the plan to purchase interim Super Hornets and called for an immediate competition to replace the CF-18s.