All-new sport utilities set to go on sale in first quarter of 2014,according to automaker

DETROIT—General Motors has unveiled the redesigned versions of its full-size SUV models as the automaker looks to hold onto its monstrous market share in the segment.

Set to go on sale in the first quarter of 2014, the all-new 2015 Chevrolet Tahoe and Suburban and GMC Yukon and Yukon XL shed the anticipated likeness of the duo’s Silverado and Sierra pickup trucks—a design trait shared by the vehicles for years.

While the the automaker’s next-generation pickups and full-size sport utilities share some of the same overall styling cues, gone are the days where the SUVs look like cap-wearing versions of their open-back brethren.

The front fascias of the Tahoe, Subarbun and Yukon, mirror images of their respective pickup counterparts for decades, are completely new designs, showing off unique headlight and grille assemblies that give the titans of the tarmac a rugged-yet-refined look while remaining true to their GM design roots. 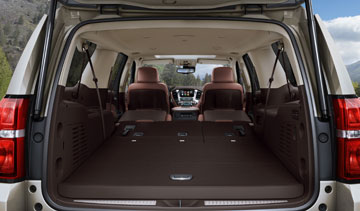 Second- and third-row fold-flat seating will be available in the four SUVs for the first time. PHOTO General Motors

On the inside, the four SUVs offer fold-flat second- and third-row seating, approximately two inches more legroom for second-row passengers and a standard eight-inch touchscreen infotainment system with available navigation.

The burly people movers are built in Arlington, Texas. 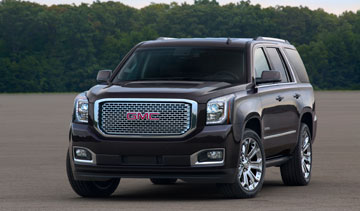