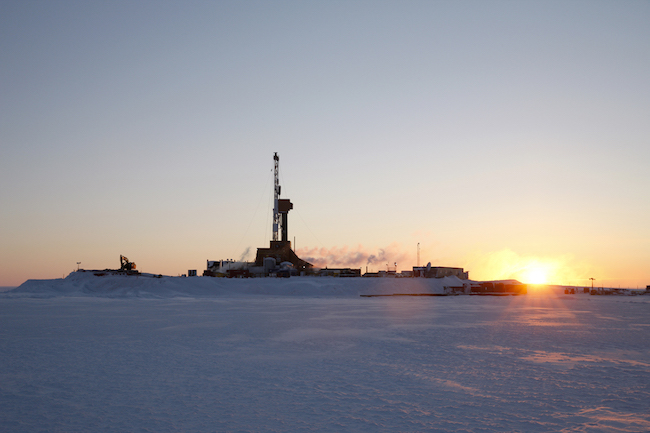 The company said its wells are just two miles off shore and only four to six feet underwater. PHOTO: Caelus Energy

Dallas-based Caelus Energy Alaska LLC announced a find of 6 billion barrels of light oil on its state leases in the Arctic Ocean waters of Smith Bay about 450 miles northwest of Fairbanks.

Chief Operating Officer Jim Musselman called the discovery exciting for the state, which receives a majority of its revenue from the oil industry.

“It has the size and scale to play a meaningful role in sustaining the Alaskan oil business over the next three or four decades,” Musselman said of the discovery in a prepared statement.

The Smith Bay development could deliver 200,000 barrels per day of light oil to the trans-Alaska pipeline, increasing volume and reducing the average viscosity of oil, which would help extend its viability, the company said.

The discovery is based on 126 square miles of three-dimensional seismic data and a pair of wells drilled this year from ice pads.

The company did not have time to flow test either well. The tests detect flow rates and pressure and help assess the capacity of a field.

The company did, however, collect extensive side-wall coring that confirmed the presence of quality sandstones containing oil, said spokesman Casey Sullivan in an email response to questions.

The wells were less than 2 miles offshore in water just 4 to 6 feet deep.

Another appraisal well and seismic work is planned to improve estimates of the oil in place. The Smith Bay complex may hold 10 billion barrels of oil, the company said.

Production is years away. The next appraisal well is planned for 2018, Sullivan said. The regulatory process takes an estimated three to five years. If all goes as planned, he said, oil could flow to the trans-Alaska pipeline in 2022.

The company is evaluating options for a drilling platform. Hilcorp Alaska LLC, a subsidiary of Houston-based Hilcorp Energy Co., has proposed building a gravel island for its Liberty prospect in the Beaufort Sea. The island could be used for five or more extraction wells to tap oil 6 miles from shore.

State incentives played a role in the discovery, Musselman said.