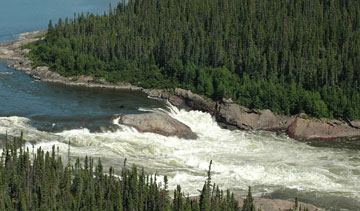 The hydro project is currently under construction on the Churchill River in Labrador. PHOTO Nalcor Energy

ST. JOHN’S, N.L.—Premier Dwight Ball says he wants answers about what happened last week when people had to be swiftly airlifted out of Mud Lake, N.L., as the Churchill River suddenly rose downstream from the massive new Muskrat Falls hydro development.

Many of the 70 residents are asking whether operations at the megaproject are to blame for conditions never seen by people who’ve lived there for decades, Ball said in an interview May 24.

“There’s no doubt people are fearful and wondering if this could happen again. We’ve got to make sure that we … get an independent assessment done so that we relieve this fear.

The mostly seasonal Labrador community was swamped May 17 after ice jammed nearby where the Churchill River meets Lake Melville.

Ball said the province is now seeking independent consultants to review water flow records, along with traditional knowledge from elders of the region.

“They’re very gentle people,” Ball said of residents he met during a tour of the area Monday. “They’re not really pointing fingers at anyone at this point, they’re just saying: ‘I was raised there. I was born there. I’ve never seen this before.”’

Nor could they remember their parents ever describing such rapid and severe flooding, Ball said. The difference this year, many residents told him, is the Muskrat Falls development upstream.

The $11.7-billion project now under construction near Happy Valley-Goose Bay has bloated in cost by more than $4 billion from original estimates and is well behind schedule. Spillway gates at Muskrat Falls that control reservoir levels are functional. Ball said Crown corporation Nalcor Energy will be asked about any water manipulations as part of the assessment.

“Nalcor will be directed to participate about anything that they would have done in recent months that could have potentially contributed to this.”

Ball said no timeline has been confirmed but a public report will be released as soon as possible.

As of Wednesday, 48 structures at Mud Lake had been inspected and 31 were approved to have power turned back on, he said. Insurance adjusters have begun estimating damages and the provincial government is accepting applications for disaster relief.

Some displaced residents are being housed at the 5-Wing Goose Bay military base, Ball said.

In an emailed statement, Nalcor said it will co-operate with the assessment.

“Nalcor will fully support all ongoing efforts and analysis to determine if its operations contributed to this event.”

The statement stressed that gates at the Muskrat Falls spillway have been moving up and down for several months “as part of regular operations to maintain a consistent water level.”

“As a result of the spring melt, more water flows into the reservoir and therefore our gates open to allow that naturally occurring inflow to pass through the spillway. By maintaining a constant water level, we did not contribute to any additional water downstream beyond that which is naturally occurring.”