Chief of $9.2 billion mega-project says departure is a personal decision 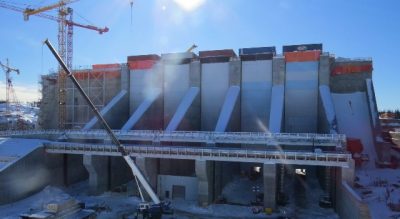 Construction of the hydro project’s spillway. When its generating station is complete, it will have a capacity of 824 megawatts and annual energy production of 4.9 terawatt hours. PHOTO: Nalcore Energy

ST. JOHN’S, N.L.—The man in charge of the troubled $9.2 billion Muskrat Falls hydro project in Labrador is stepping down, leaving a high-profile position that he says often thrust his family into the spotlight as much as himself.

Martin said the intense public scrutiny that can come with leading the Crown corporation has been hard for his wife and four sons. He said he’s looking forward to the birth of his second grandchild and has decided it’s time to step down after 10 years.

“It’s my decision … I’m comfortable that this is the time,” he told a news conference.

“I’m extremely proud of the accomplishments we have all achieved as a company. Nalcor is our province’s heritage fund and we should all be very proud.

The $9.2-billion dam, hydro station and transmission links now under construction are over budget and timelines.

An interim report recently released by EY—formerly Ernst and Young—found problems with oversight.

The province is set to give Nalcor another $1.3 billion this fiscal year for commitments made under the previous Tory government.

There’s been much public debate about Muskrat Falls, Martin said, but some important points have been lost.

“We need the power,” he said of the project, especially on the heavily populated Avalon Peninsula. “We will pay back our investment and dividends will be paid back to the people of the province.”

Those earnings will help offset increased power bills for ratepayers, he said.

Martin said he initiated a call to Premier Dwight Ball on Sunday night and said Ball was “gracious” about his departure.

Ball says it was Martin’s choice “at this time in his life.”

“We had a good working relationship,” Ball said Wednesday, adding Martin had done a “good job.”

Ball says a new president will be chosen as soon as possible and any severance will be up to the Nalcor board.