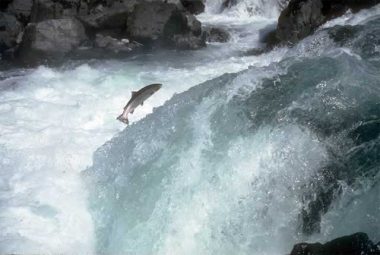 VANCOUVER—The federal government is still investigating an experiment off the West Coast almost four years ago aimed at boosting salmon stocks that sparked an international outcry.

Now a former director and operations officer of Haida Salmon Restoration Corp. says he wants to carry out another ocean-fertilizing exercise, this time off South America.

Jason McNamee says the company Oceaneos, where he serves as chief operations officer, has been in talks about fertilizing the ocean with iron with the Chilean government, which could not be reached for comment.

In July 2012, the now-inactive Haida Salmon Restoration travelled to international waters near the islands of Haida Gwaii where it dumped 100 tonnes of iron sulphate into the water in an effort to restore waning salmon stocks.

Critics said the practice was largely untested. But proponents of ocean fertilization contend the process stimulates biological productivity in the marine environment, triggering a phytoplankton bloom that travels up the food chain and ultimately bolsters salmon populations.

Environment Canada’s enforcement branch launched an investigation in August 2012, though the agency recently declined to answer any questions about the case.

“As the matter is under investigation, it would be inappropriate to provide further information at this time,” spokeswoman Natalie Huneault wrote in an email.

McNamee predicts this year’s British Columbia return should be “one of the largest chinook fisheries ever.”

But biologist Bruce Patten of Fisheries and Oceans Canada said the possibility of a sizable 2016 salmon return can’t necessarily be attributed to the 2012 iron fertilization.

Sea-surface temperatures and a particular fish stock’s history are two factors considered when estimating salmon returns, though in recent years these indicators have strayed into unprecedented levels, which Patten said throws off a model’s predictive ability.

Tim Parsons, a retired oceanography professor at the University of British Columbia, met early on with proponents of the Haida Gwaii experiment and recommended against the project because of what he saw as a lack of scientific supervision.

In an email, Parsons said he strongly supports iron fertilization, though he attributed part of what he considers the 2012 project’s success to luck: being in the right place at the right time.

Some experts have also raised concerns over the relative absence of enforceable regulation surrounding the practice.

“There are a lot of scientists who think it’s dangerous to go around dumping things like iron in the open ocean and have spent quite a lot of time trying to find ways to regulate this so it’s not just a free for all,” said Prof. Ken Denman of the University of Victoria, who also serves as a senior researcher with Fisheries and Oceans.

Data from the Haida Gwaii experiment is of questionable value, he added.

“Anybody who says it was a rigorous scientific experiment is either misleading or is being misled.”

McNamee said the proposed Chilean project is still in an early phase, with no agreement in place.

In Canada, the iron dust was also dumped in ocean in the belief that the phytoplankton bloom would act as a natural sponge to capture carbon from the atmosphere. The project in Chile won’t investigate that prospect as part of a cap-and-trade credit system, said McNamee.

“That’s where most of the controversy was (in 2012). Everyone thought we were out there being cowboys hoping to make a gazillion dollars.”

New projects would aim for a 50-per-cent split in funding between government and industry, would have to secure the support of the scientific community and abide by local and international laws, McNamee said.

Oceaneos began looking for scientific advisers on the Chilean project at least a year ago.

One prominent scientist who agreed to provide advice is Ricardo Letelier of Oregon State University,

Letelier said in an interview that he supports the scientific goals of the project but has concerns over the commercial applications and the way the experiment rolls out. There also needs to be an agreement among the scientific community about how these findings can be used, he said.

“These kinds of experiments, if they are well done, can provide a lot of advancement in our understanding of the complexities of ecosystem dynamics in the open ocean,” said Letelier, who is originally from Chile.