May saw the highest drop, plunging by a third to 6,566 rail cars of crude oil, as the wildfire in Fort McMurray, Alta., reduced output from the oilsands 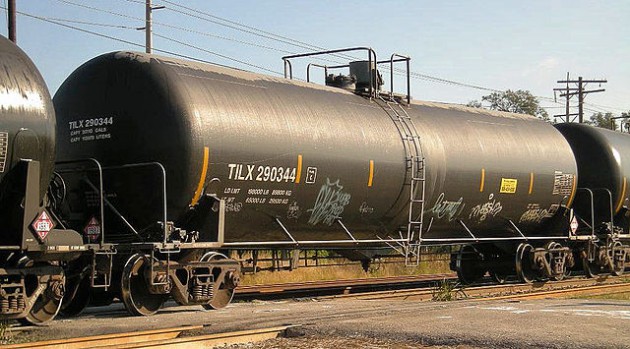 CALGARY—Shipments of crude-by-rail have shown a steady decline this year and railway executives see little hope of a quick turnaround.

The latest data from Statistics Canada, released July 27, reveal shipments of railcars filled with fuel and crude oil have dropped every month since January, both compared with the previous month and the same month the year before.

May saw the highest drop, plunging by a third to 6,566 rail cars, as the wildfire hazard in Fort McMurray, Alta., reduced output from the oilsands by more than a million barrels a day.

But April also saw a 16 per cent drop from 2015 to 11,808 railcars, while between December and April the number of cars dropped 23 per cent.

“Regarding the crude by rail today, the volume is still weak,” said Jean-Jacques Ruest, an executive vice-president at Canadian National Railway, in a conference call with investors earlier this week.

He added the company faces stiff competition from pipelines, which are much cheaper than rail.

“Pipeline really is the king. That dominates the marketplace and that’s the reason why our carload is down to the level it is right now,” said Ruest.

Both CN Rail and Canadian Pacific Railway cited lower shipments of energy commodities like crude oil to explain lower earnings in the past quarter.

Hunter Harrison, chief executive officer of CP Rail, said he expects continued headwinds for crude shipments for the rest of the year.

“I think we see improvements second-half everywhere but probably crude,” said Harrison on an investor call.

Dirk Lever, who covers energy infrastructure at AltaCorp Capital, says shipping by rail costs about $10 to $15 per barrel, compared with roughly $5 for pipelines.

With oil prices still significantly down, he expects a continued drop in crude-by-rail shipments, as contracts signed when oil was higher run out.

“Logically you would expect as commodity prices fall, people would move away from using rail,” said Lever.

Derailments having an impact

Shipments of crude-by-rail did spike last fall, despite the low oil prices, but Lever says there are a multitude of factors, including pipeline disruptions and the fact that rail is much faster, that could have contributed to increases in rail use.

The number of railcars used to ship crude peaked in January 2014 at 17,371 cars, according to Statistics Canada data.

National Energy Board data, which reports only exports of crude-by-rail, also show declines for the first three months of this year, but an uptick in April after especially low exports in the month last year.