Researchers say an exotic spice grown mainly in Iran could turn farmers' fortunes in the Northeast to the tune of $100,000 per acre 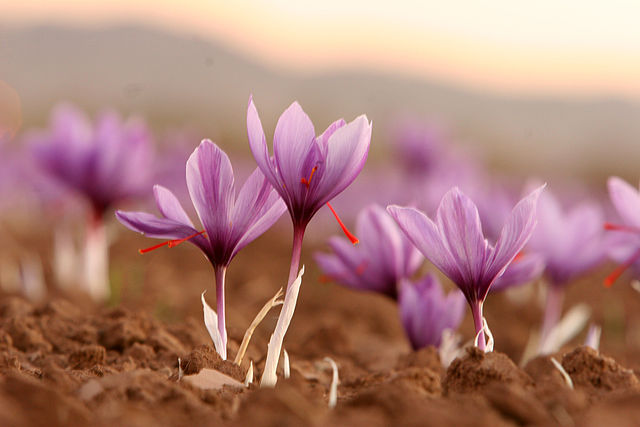 Saffron is harvested from the distinct red stigma of the crocus sativus. Today, the overwhelming majority of the highly-coveted spice is grown in Iran. PHOTO: Safa Daneshvar/Wikimedia Commons

BURLINGTON, Vt.—As spring crocus blooms approach, some growers have visions of a fall-flowering crocus that produces saffron, the world’s most valuable spice.

University of Vermont researchers have been raising the exotic spice now grown primarily in Iran and are encouraging growers to tap into what they hope will be a cash crop.

It’s not a hard sell, particularly in the short growing season of the Northeast. A crop harvested in the late fall, when other crops have died off, that tolerates extreme climates and yields an average of US$19 per gram.

“Is this the red gold we’ve been looking for?” said Patricia Fontaine, of Palmer Farm in Little Compton, Rhode Island. She, her mother and brother attended a sold-out workshop this month on growing saffron hosted by the University of Vermont that drew growers from New England and as far away as Indiana and California.

The family had been searching for a crop to grow in their high tunnel, a greenhouse-like structure without heat like one UVM also used to raise the spice.

“We were like looking into everything and then all of a sudden this came up, and we were like, ‘This can’t be real,”’ said Fontaine’s brother Ryan Golembeske.

They estimate an acre of saffron grown in high tunnels could bring in $100,000 a season.

The seasoning comes from the dried red threads, or stigmas, of the plant’s purple flower, enhancing dishes like paella, bouillabaisse and risotto. It’s also prized as a natural dye, for medicinal purposes and was used by Cleopatra in warm baths.

UVM is not the first in the U.S. to raise saffron. There are other small growers around the country, including Mennonite and Amish farmers, who have been raising it outside in Massachusetts, Pennsylvania and Maine. The Mennonite church had been looking for a way to preserve its small farms, said Peter Johnson, of the Amish-Mennonite Center of Sustainable Agriculture, in Wenham, Massachusetts.

“We are convinced that this is the crop that will keep our young kids on the farms,” he said at the workshop.

Ara Lynn, of Amazing Flower Farm in New Ipswich, New Hampshire, has already planted some saffron to supplement her business of raising annuals and perennials.

“It gives a potential income stream at a time when we’re doing nothing, or if we are, we’re just paying workers and all the money’s going out and nothing’s coming in, so it makes a lot of sense,” she said at the workshop.

But she worries about marketing.

“If we can’t find a way to market it and get that kind of money that they’re talking about then it’s just another endeavour that doesn’t work,” she said.

UVM researchers believe the more growers, the better. “How can you start encouraging a market for saffron if you only have a few growers growing it?” said Margaret Skinner.

One of the biggest questions for the American Spice Trade Association is whether labour costs would have a significant effect on the cost of the product, said Cheryl Deem, executive director.

The process of picking the flowers, gathering the delicate stigmas and drying them is labour intensive, but only for about a month—a very short period of time—and in the off season, not dissimilar from maple syrup, said UVM researcher Margaret Skinner.