TransCanada seeks approval to proceed with $1.4B natural gas pipeline in B.C. 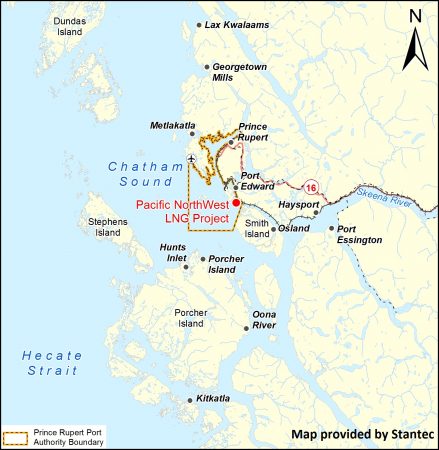 The proposed site of Pacific Northwest LNG. Natural gas from TransCanada’s North Montney Mainline will be brought to Asia via this Malaysian-backed project.
PHOTO: Government of Canada

CALGARY—TransCanada Corporation announced Mar. 20 that it has filed a variance application with the National Energy Board to proceed with construction of the North Montney Mainline (NMML), a $1.4 billion natural gas pipeline project in northeast B.C.

Located in the Peace River Regional District, NMML will encompass 301 km of pipeline. Two sections will stretch from Fort St. John, B.C., in the south to the Khata Creek region in the northwest. The southern section of the pipeline will connect to a divergent pipeline that will carry gas to a processing facility on the Pacific Coast.

TransCanada has previously been granted the required federal and provincial approvals to construct NMML, subject to conditions that included the requirement for a positive final investment decision on the proposed Pacific Northwest Liquefied Natural Gas (PNW LNG) Project.

PNW LNG is a proposed LNG processing facility and marine terminal on Lelu Island, near Prince Rupert, B.C.—which will connect to NMML through the Prince Rupert Gas Transmission Project.

PNW LNG is backed by Petronas, a Malaysian oil and gas firm, which will convert Canadian natural gas to LNG for export to Asia.

The requested variance would allow TransCanada to move forward with construction of the majority of NMML, prior to a final investment decision on PNW LNG.

In support of NMML, TransCanada has secured new 20-year commercial contracts with 11 shippers, for approximately 1.5 billion cubic feet per day of firm service.

Subject to regulatory approvals, TransCanada plans to begin construction in the first half of 2018, with facilities being phased into service over a two-year period, beginning in April 2019.

The Montney basin is a shale rock formation stretching across northeast B.C. and northwest Alberta, and it’s one of the world’s most significant natural gas reserves.