CN's chief operating officer said "The near future looks bright for the grain business," noting that the rail carrier's revenues from the commodity are expected to grow through the third quarter of next year 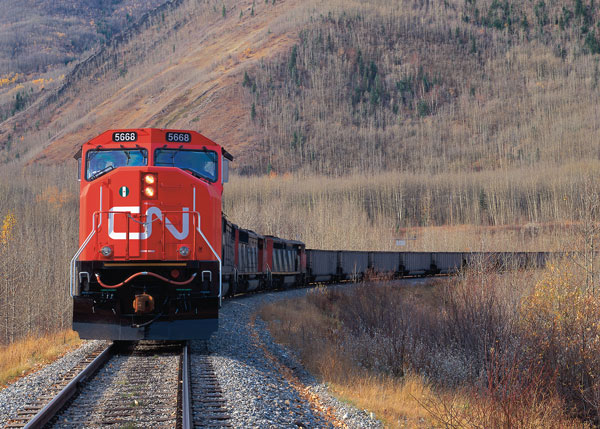 MONTREAL—Canadian National Railway Co. says it has recalled laid-off employees to handle the start of what is expected to be bumper grain crops in Canada and the United States.

“We’re handling and ready to handle more of the crop that has been produced,” chief operating officer Mike Cory said after the Montreal-based carrier reported third-quarter results.

He didn’t provide details of how many workers are impacted by the change or where they are located.

“In order to deliver the efficient, reliable service the supply chain requires, we recalled employees back to work. We’ve repaired grain cars and deployed them close to our customers so they are ready for use after harvest,” said Cory.

Over the last few weeks, he said the railway delivered record weekly grain shipments more than once by working with partners and lengthening the size of trains.

“The near future looks bright for the grain business,” he added, noting that revenues from the commodity are expected to grow through the third quarter of next year.

CN Rail raised its outlook for the year, saying it expects adjusted earnings will increase by about one per cent above the $4.44 per share earned last year. It previously predicted its 2016 results would be roughly in line with its 2015 results.

The improved outlook came Tuesday as it reported a profit of $972 million or $1.25 per diluted share for the three months ended Sept. 30, down one cent from a year ago when it earned approximately $1 billion.

Operating income declined five per cent and revenues fell six per cent to $3.01 billion from $3.22 billion a year ago, largely due to lower volumes of crude oil, coal and frac sand.

CN Rail was expected to earn $1.21 per share on $3.14 billion in revenues, according to analysts polled by Thomson Reuters.

“These results demonstrate how nimble we are at adapting to today’s reality, seizing opportunities to deliver bottom-line results while positioning ourselves to meet tomorrow’s prospects,” he told analysts during a conference call.

After 100 days at the helm, Jobin said he’s hoping to continue to maintain the momentum created by his predecessors Claude Mongeau, who retired due to health reasons, and Hunter Harrison, who came out of retirement to head rival Canadian Pacific Railway (TSX:CP).

“I’m not at the point where I feel there is a breakthrough strategy that’s waiting around the corner,” he said.

The railway said it posted a record 53.3 per cent operating ratio, which measures the percentage of revenue required to operate the company.

During the third quarter, coal revenues were down 32 per cent, metals and minerals were off 20 per cent, petroleum and chemicals off 13 per cent and intermodal down four per cent. The decreases were offset in part by increases in grain and fertilizers, and automotive and forest products.