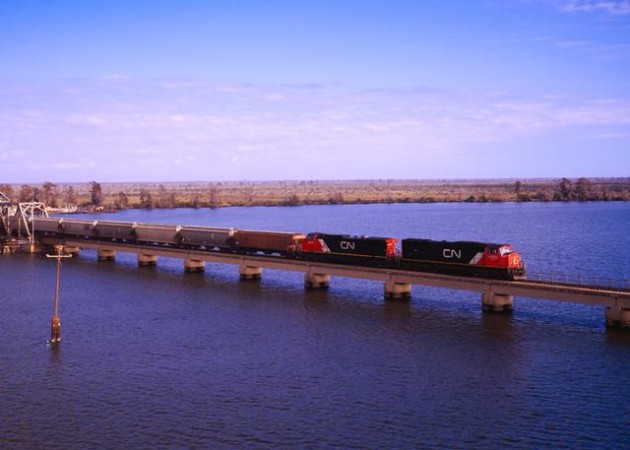 MONTREAL—Canadian National Railway says it could shed more employees in 2016 if freight volumes fall again this year as expected.

The country’s largest railway saw its workforce decrease by nine per cent or 2,300 last year, with about 1,150 employees laid off at year’s end.

CN Rail, with about 25,000 employees, said its natural attrition rate of close to eight per cent annually gives it flexibility to hire or not depending on market conditions.

Unlike CP Rail, which last week estimated its workforce would be down close to 1,000 this year, CN Rail didn’t put a number on the potential job cuts.

Chief executive Claude Mongeau said the Montreal-based carrier intends to remain the industry’s efficiency leader as its operating ratio fell to a record low of 58.2 per cent in 2015 and 57.2 per cent in the fourth quarter.

“We manage resources and we manage them in line with volume and we don’t know where the volume will be, but we are, as we did in 2015, committed to keep our efficiency levels up,” said Mongeau, who has returned from a five-month medical leave to treat a pre-cancerous tumour in his larynx.

CN Rail expects volume will be soft again in the beginning of 2016 before stabilizing later in the year.

Despite the challenges, it boosted its quarterly dividend by 20 per cent on anticipation that adjusted profits will grow by about five per cent above the $4.44 per share earned in 2015.

A quarterly dividend of 37.5 cents per share, up from 31 cents, will be paid March 31 to shareholders as of March 10. Since going public in 1995, the railway has declared 20 consecutive dividend increases, averaging 17 per cent per year.

The railway capped the challenging year by growing profits 11 per cent to $941 million or $1.18 per share in the fourth quarter.

Analysts had expected the railway to earn $885.4 million or $1.11 per share in the quarter.

Carloadings declined eight per cent while revenue ton-miles declined five per cent because of a weakened Canadian economy.

The decrease in quarterly revenues was mainly attributable to lower shipments of energy related commodities in oil and gas, as well as semi-finished steel, iron ore, coal and U.S. grain, partially offset by the positive impact of a weaker Canadian dollar.