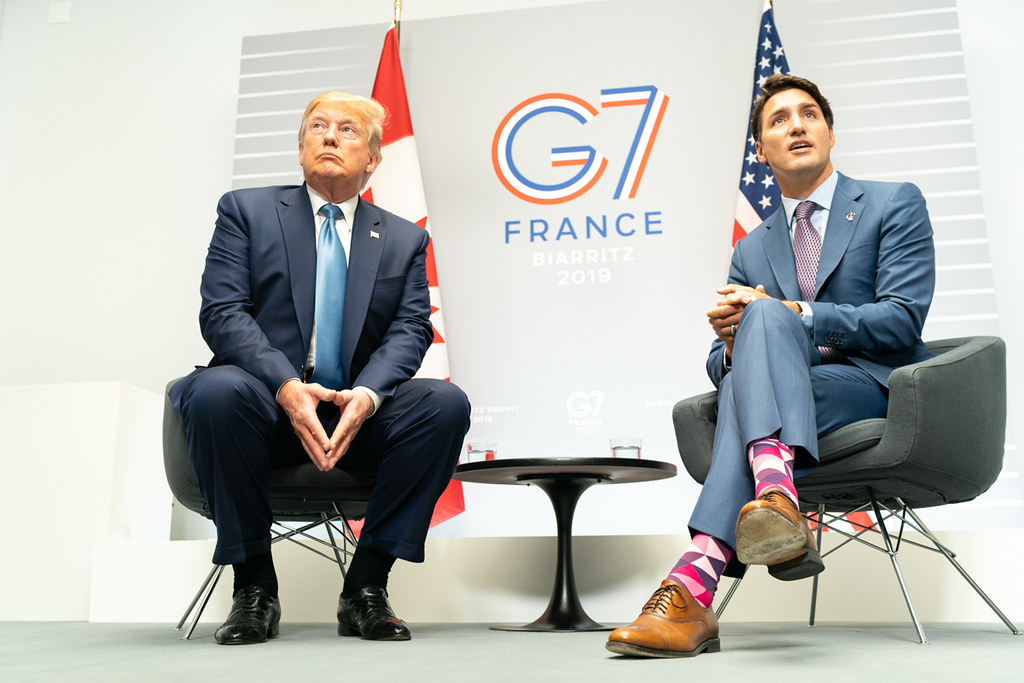 BIARRITZ, France – Justin Trudeau met face-to-face with U.S. President Donald Trump today on the margins of the G7 summit in France for a discussion that covered trade, diplomacy and a bit of a lighter topic: basketball.

The new North American trade deal and China’s detention of two Canadians have been at the centre of conversations between Trudeau and Trump in recent weeks and were at the fore of the discussions Sunday, according to a report on the meeting sent by Trudeau’s office.

The mood between leaders at the annual get-together has repeatedly been described as tense, with a clear divide reported between Trump and the leaders of the other G7 countries – France, Britain, Canada, Germany, Italy and Japan.

Trump has disputed any accounts of tension. He offered a small gesture of friendship to Canada Sunday, congratulating Trudeau on the Toronto Raptors winning the NBA Championships back in June, according to the statement from Trudeau’s office.

Prior to their meeting, the two men had sat for a photo and in brief remarks focused on their shared commitment to seeing the new North American trade deal enacted.

“There’s a lot of people wanting to make trade deals with each other and we have a deal that we were able to negotiate that is good for our workers, our citizens, good for the middle class,” Trudeau said.

So far only Mexico’s government has officially signed off on the accord.

But Trump insisted the deal he has dubbed the U.S. Mexico Canada Trade Agreement, or USMCA, has broad support in the United States and he is optimistic it will get the seal of approval from Congress.

Trump has tried to downplay concerns the meetings of the Group of Seven leaders are strained, saying in a tweet that the leaders are all “getting along very well,” and taking issue with some media reports indicating otherwise.

One point of contention appears to be Iran: French President Emmanuel Macron said the leaders agreed during Saturday’s dinner that France could serve as a G7 messenger to Iran. Trump denied agreeing to anything, and Macron was forced to play down his role and acknowledge Trump’s status as “the president of the world’s number one power.”

On Sunday, Iranian Foreign Minister Mohammad Javad Zarif then showed up unannounced and headed straight to the building where leaders of the world’s major democracies have been debating how to handle the country’s nuclear ambitions.

Meetings between him and the U.S. are not expected.

The G7 leaders began their summit meetings this morning with a working session that focused on the economy and security issues.

A Canadian official said Trudeau stressed his support for free and fair trade and for efforts to reform the World Trade Organization (WTO).

During the photo-op with Trump and Trudeau, the U.S. president shared a harsh assessment of the WTO, saying he believes it is even worse than NAFTA, which he again said was the “worst trade agreement ever done.”

Trump had been trying to use the summit to rally the other leaders to do more to stimulate their economies, as fears rise of a potential slowdown in the U.S.

His summit counterparts are trying to convince him to back off the trade conflicts with China and other countries, seeing the disputes as contributing to the overall economic weakening.

The annual G7 summit has historically been used to highlight common ground among the world’s leading democracies. But in a bid to work around Trump’s impulsiveness, Macron – who is hosting the leaders – has decided to break from tradition and not issue a formal joint statement at its conclusion.

– with files from The Associated Press

Related Stories
Trudeau meets with Macron as G7 leaders wrap up meeting in Biarritz
Trudeau, Trump to come face to face at NATO for first time since G7 in Quebec
Trudeau, Macron brace for Trump ahead of G7 with meeting in Ottawa
Trudeau kept ‘back pocket’ G7 summit statement to guard against Trump
Manufacturing In Focus