Building on the unprecedented success of its Model 3 launch, the electric vehicle maker unveiled plans to drastically scale-up its manufacturing

The plant floor at the company’s Fremont, Calif. facility, where the automaker currently produces the Model S and Model X. PHOTO: Alexis Georgeson/Tesla

DETROIT—Once again, Tesla Motors is staring down the naysayers.

CEO Elon Musk’s surprised investors last week with a promise to make 500,000 cars per year by 2018, two years ahead of plan—a brash projection given that Tesla has missed significantly smaller production targets in the past.

Auto industry analysts balked. Many doubt that Tesla has the cash, plant capacity or manufacturing expertise to pull off those numbers.

“This is beyond challenging,” said Jeff Schuster, senior vice-president for forecasting at the consulting firm LMC Automotive. “There are so many things that would have to be lined up in a very short amount of time for that to happen.”

After several days of trading following the May 4 announcement, the automaker’s shares are down more than five per cent.

But the auto industry and some on Wall Street have been wrong before about 13-year-old Tesla. It has sold more than 110,000 vehicles worldwide even without a traditional dealer network. The company has never made a full-year profit but its market value is more than half that of General Motors Co. U.S. sales of Tesla’s Model S luxury sedan jumped 51 per cent last year, even as luxury competitors from Mercedes and Audi saw big sales declines. It doesn’t advertise, but drew lines hundreds deep in March when it started taking deposits for its newest car, the lower-cost Model 3. 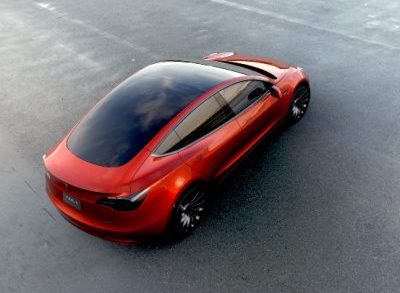 Tesla introduced its hotly-anticipated Model 3 at the end of March. The automaker has racked up more than a quarter-million pre-orders since, greatly exceeding expectations. PHOTO: Alexis Georgeson/Tesla

Tesla has plenty of believers. Among them is Andrea James, a longtime Tesla analyst with Dougherty and Co. She announced Wednesday she was resigning and said she can’t wait to buy shares in the EV maker.

“Does Tesla have a technology lead that is real? Can Tesla build it? Will people come? Yes, yes and yes,” James said.

Skeptics point to Tesla’s significant issues with bringing vehicles to market in the past. The Model X SUV, Tesla’s latest vehicle, was delayed by more than 18 months while Tesla fiddled with its complicated features, like gull-wing rear doors and free-standing rear seats. That has many doubting Tesla can meet its goal of producing 100,000 to 200,000 Model 3 sedans in the latter half of 2017.

“We want to believe, but we simply cannot,” said Brad Erickson of Pacific Crest Securities in a note to investors.

Musk said production of the Model X can’t be compared to the much less complex Model 3. Musk says the company can apply lessons from the Model X to the Model 3, including setting firm deadlines for suppliers.

“Tesla is really hell-bent on being the world’s best at manufacturing,” Musk said.

Others question whether Musk has the money to meet his goals. Tesla ended the first quarter with US$1.4 billion in cash, but Schuster says adding an assembly line and tooling to make 250,000 or more Model 3s would cost an estimated $1 billion alone. And while Tesla collected an estimated $400 million in deposits for the Model 3, the money is refundable if customers decide not to buy.

Tesla said it now expects to spend more than $2 billion on capital projects this year, up from its forecast of $1.5 billion. Musk said Tesla is open to raising capital but he didn’t give a timeframe.

“I can’t argue with what he has been able to accomplish so far, but we’re taking about a complete magnitude change in complexity,” Schuster said of Musk.

Musk said he may yet change minds.

“What I find ironic about a lot of the naysayers is that the very same people will transition from saying, ‘It was impossible’ to saying ‘It was obvious,”’ he said.