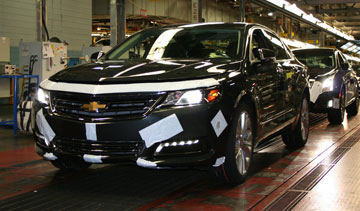 The Chevy Impala in production at the Detroit-Hamtramck facility. The plant will nearly double its workforce with a second shift. Once hiring is complete, the plant will employ 2,800 workers. PHOTO GM

DETROIT—With strong demand forecast for a number of its vehicles, General Motors is planning to nearly double its workforce at Detroit-Hamtramck Assembly.

The company will add a second shift, and create more than 1,200 hourly and salaried jobs in the process. Once hiring for the new positions is complete, the plant will employ approximately 2,800.

“This is the result of the award-winning vehicles Detroit-Hamtramck produces and the confidence GM has in our team to build world-class quality for our customers,” plant manager, Gary West, said.

GM said hiring for the second shift is already underway, and the change to a two-shift system is expected to begin in early 2016.

“The workforce at Detroit-Hamtramck is second to none,” UAW Local 22 shop chairman, Don LaForest, said. “We appreciate the opportunity to expand our UAW-GM family.”

The company’s Detroit-Hamtramck Assembly opened in 1985 and covers 4.1 million square-feet. GM has invested US$1 billion in the plant over the last five years, something it said has made it one of the company’s most-agile manufacturing facilities in North America. The plant builds the Chevrolet Volt, Impala and Malibu, as well as the Cadillac ELR on a single production line. Meanwhile Detroit-Hamtramck will begin production of the Cadillac CT6 in early 2016.