TwinTrack is compatible out-of-the-box with over 500 industrial robots from the 50 brands that RoboDK already supports. 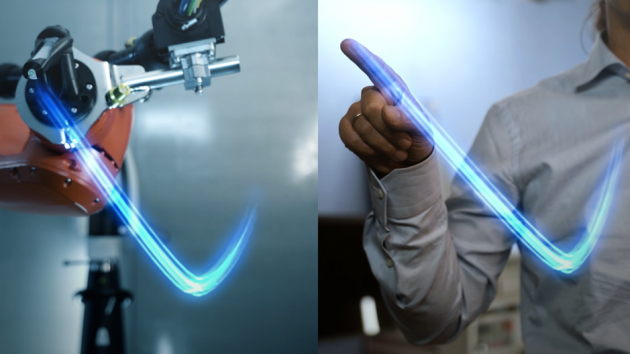 MONTREAL — Robot software company RoboDK has released TwinTrack, a tool that allows users to program any industrial robot by tracing the desired motion with a handheld probe.

As robots move into the hands of less experienced users, there is a growing need for more intuitive programming interfaces that are accessible to everyone. In January 2021, Montreal-based robot software company RoboDK released a new type of programming tool. TwinTrack is a combined solution that allows users to program any industrial robot with a laser tracker and its handheld probe.

The need for easier robot programming tools
Over the last decade, there has been a move towards more intuitive programming interfaces in robotics. However, many industrial robots still need to be programmed using the proprietary languages or systems provided by their manufacturers.

Albert Nubiola, RoboDK’s CEO, explained: “In an ideal world, programming a robot would be as easy as doing the tasks ourselves by hand. It is likely that your task is currently performed by a human. They are probably the best person to teach the robot, but what if they have no experience with robot programming?”

It can be applied to many robot applications including welding, painting, deburring, dispensing and more.

The question of compatibility in industrial robotics
Although this is not the first handheld robot programming tool on the market, the problem with most existing tools is the lack of compatibility between different robots. Solutions are usually tied to a particular robot brand or 3rd-party accessory.

As Nubiola explains “Compatibility is very important for us. We want people to be able to program their robot more easily whatever brand they are using.”

To this end, TwinTrack is compatible out-of-the-box with over 500 industrial robots from the 50 brands that RoboDK already supports. “And if your robot model isn’t already supported, we’ll add it for you,” says Nubiola.

This push for compatibility also extends to the measurement system that provides the solution’s tracking functionality. RoboDK has teamed up with a number of global manufacturers of measurement systems including Creaform, Leica/Hexagon, API, and Faro, and the list of supported systems continues to grow.