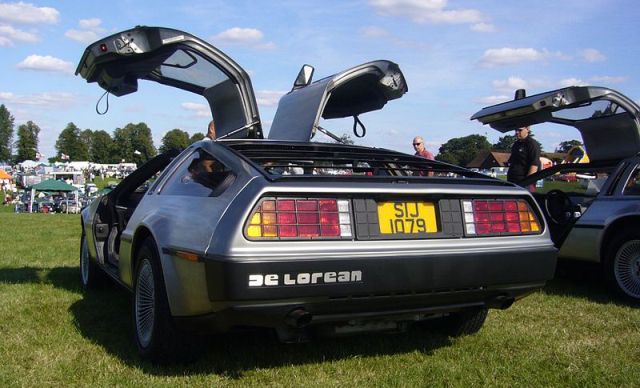 The DeLorean DMC-12, which had a brief, memorable production run in the ’80s, may soon be rolling off the line yet again. PHOTO: Mark Fosh, via Wikimedia Commons

HUMBLE, Texas—One-time General Motors Co. executive John DeLorean would probably disapprove of the seeming lack of innovation, but the fabled Detroit engineer, turned upstart auto chief, turned fraudster would not likely lodge a complaint that his iconic DMC-12—better known simply as a DeLorean—may soon be back in production.

With a little more than six months to go before the U.S.’s Low Volume Motor Vehicle Manufacturers Act is scheduled to come in effect, the resurrected DeLorean Motor Co. has announced it continues to make steady progress toward bringing the gull-winged DMC-12 back into production.

The company said it is currently tracking down a range of suppliers to build new components for the old car, which has earned a cult following for its place in the ’80s blockbuster Back to the Future.

The replica cars will be getting a futuristic spin, however. Because of the significant advancements in material science and manufacturing over the past 35 years, the company plans to upgrade a number of components to deliver better performance and meet new regulations. The DeLorean’s engine in particular will need a significant retrofit to meet current emissions rules, but a number of other components, including the chassis and electrical system will also get a contemporary redesign.

The revived company is wary of the government’s 2017 timeline to enact the new low-volume vehicle manufacturer law, however—a factor that could delay Delorean’s first-quarter 2017 production timeline. Designed to give replica car makers the ability to produce functioning new vehicles, the legislation introduces several important caveats into the regulations governing U.S. automakers. Most importantly it will allow low-volume manufacturers to build up to 500 replica motor vehicles per year within a regulatory framework catered to small manufacturers, as opposed to one designed for automakers that ship millions of units each year.

Though progress is being made on enacting the law, DeLorean said the process is moving “slower than expected.” The company, as well as other replica car makers and the Specialty Equipment Manufacturers Association continues to press bureaucrats in Washington to finalize the new law before 2017.

If all goes well, John DeLorean’s iconic vehicle, which ceased being made about two years after the start of production on the original run, will begin rattling off the line again early next year—about two years after Doc Brown’s DeLorean time machine was scheduled to makes its futuristic appearance in fictional Hill Valley, Calif.