The U.S. firm's tiny electric cars cost just $11,900 and weigh only 1,000 pounds—about one-fourth the weight of a standard car 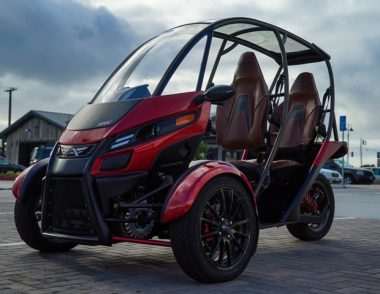 The company says it’s on track to deliver the first of its oddball electric cars to customers this year. PHOTO: Arcimoto

EUGENE, Ore.—Arcimoto, an Oregon-based electric vehicle company, raised nearly US$20 million in a recent initial public offering and its founder says the firm is on track to deliver its first vehicles to customers this year.

Arcimoto shares will begin trading Sept. 21 on Nasdaq under the ticker symbol FUV. That stands for “Fun Utility Vehicle,” which is how the company describes its vehicles with seats for a driver and one passenger, three wheels and motorcycle handlebar-style steering.

At 1,000 pounds (454 kilograms), the vehicles are about one-fourth the weight of a standard car. They’re also much smaller. Three fit into a typical parking space.

The vehicles can travel 70 miles (113 kilometres) on a fully charged standard battery pack or 130 miles (209 kilometres) with an extended range battery.

Arcimoto in the coming months plans to establish a larger production facility at an undisclosed location in Eugene—home to the University of Oregon. Company founder Mark Frohnmayer’s late father—former Oregon Attorney General Dave Frohnmayer—was president of the university from 1994-2009.

Frohnmayer said the company’s goal is to dramatically increase production in 2019 and build at least 10,000 vehicles.

In its monthlong IPO that closed Friday, Arcimoto sold stock for $6.50 a share.

In its initial June prospectus, Arcimoto said it hoped to raise $10 million through the stock sale, and planned to raise an additional $18 million within 15 months.