The speech followed an announcement that 18 new ships will be built to renew the Canadian Coast Guard fleet at a cost of $15.7 billion 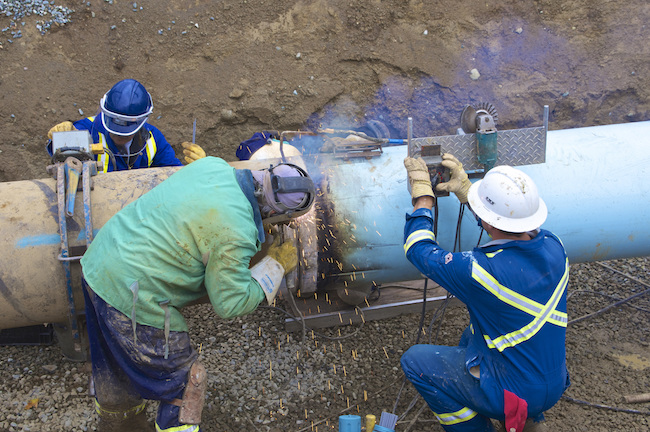 VANCOUVER – An Indigenous protester opposed to the Trans Mountain pipeline expansion interrupted a speech by Prime Minister Justin Trudeau at a Liberal fundraiser on Wednesday.

Will George of the Tsleil-Waututh Nation in North Vancouver stood up and called Trudeau a liar and a weak leader.

“Climate leaders don’t build pipelines. So many of our elected leaders in B.C. oppose the pipeline. The mayor of Vancouver got arrested opposing this pipeline,” he said, referring to Kennedy Stewart, who was arrested last year while still a New Democrat MP.

“I’m from Tsleil-Waututh Nation and we say no,” George added. “Are you going to push this pipeline through?”

Trudeau greeted George by name and thanked him for being a strong voice for his community. As the protester continued to talk over him, Trudeau calmly asked if he could respond before saying his government is protecting the environment, including by bringing in a $1.5-billion plan to protect Canada’s oceans.

He said there are a broad range of perspectives and his government’s approach has always been to listen to diverse views and try to respond the best way it can.

“We’re never going to get to unanimity,” Trudeau said.

George asked Trudeau to meet with his people and accused the prime minister of only sitting down with groups that want to “sign off” on the project.

“What do you tell your children?” George asked. “I honour my ancestors, my children, by protecting my lands and waters. You threaten our lands and waters. How dare you bring that through our waters? Those are our spiritual highways. You have no right to do that to us.”

Trudeau said George was welcome to stay if he wanted to listen, but he was eventually ushered out of the Opus Hotel in downtown Vancouver by a manager and an RCMP officer.

Dozens of protesters gathered outside the event, singing and chanting anti-pipeline slogans. Activists drove around the block in a truck with a billboard that read “Trudeau: No pipelines in a climate emergency.”

As George was leaving the event, Trudeau asked him to give his best to those gathered outside, saying their voices are very important to the next election.

This isn’t the first time George has spoken out during an event with the prime minister. In January, he called Trudeau a liar during a town hall meeting in Kamloops, B.C.

He was involved in launching a protest “watch house” near the Trans Mountain terminal in Burnaby, B.C., where he stayed for about a year. He was also arrested while protesting the project on a nearby bridge, he said.

Outside the hotel on Wednesday, George said he and another protester paid $250 each to attend the Liberal fundraiser and it was worth it to get inside to voice his concerns.

He said Trudeau didn’t answer any of his questions.

“It is frustrating. There are a lot of emotions when I go into these rooms and address him on such a serious matter,” he said.

George added that he understands why some First Nations support the Trans Mountain pipeline project.

“You’re looking at nations that can’t hunt or gather any more. They have to take these deals,” he said.

Trudeau’s speech was the first of two Liberal fundraising events in Vancouver after he announced that 18 new ships will be built to renew the Canadian Coast Guard fleet at a cost of $15.7 billion.

He told the audience at the lunchtime event that climate change is a real and pressing issue and Conservative politicians don’t believe it’s important to take action.

“There is unfortunately still a debate going on as to whether or not we should be fighting climate change. That sort of blows my mind,” he said.

The government purchased the Trans Mountain pipeline and expansion project for $4.5 billion. Construction was put on hold last August after the Federal Court of Appeal struck down the federal permit for the project.

The project would triple the existing capacity from the Edmonton area to Burnaby, B.C., and increase the number of tankers in Vancouver’s Burrard Inlet seven-fold.

Trudeau’s second fundraiser was held over dinner at Neptune Palace Seafood Restaurant, where tickets went for $1,500 per person, or $750 for adults under 35.

The prime minister told attendees that Conservatives believe in “trickle down economics,” or the idea that giving tax breaks and advantages to the wealthiest will create growth that will “somehow end up helping hardworking, ordinary Canadians.”

But he said that idea failed the previous Conservative government, which didn’t understand that even though there was growth in the economy, so many average Canadians felt it didn’t touch them.

“We got elected with a very different idea for our economy and for Canadians,” he said. “The idea that if you want to create growth, it has to be for everyone, not just for a few,” he said.

– With a file from Amy Smart.