As part of the competitiveness plan, new write-offs alone are expected to lower federal revenues by about $14 billion over the next half-decade. Among other write-off measures, companies will be able to expense a larger share of newly acquired assets 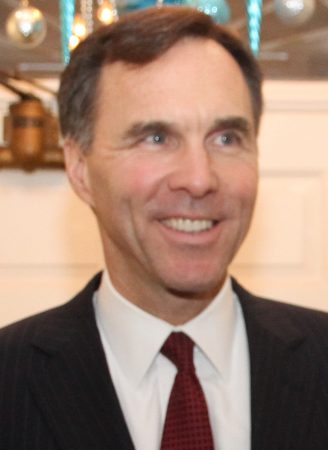 OTTAWA – The federal Liberals have come up with a $16-billion answer to Canada’s competitiveness concerns.

Ottawa’s long-awaited plan to help Canada compete with the United States for investment dollars is the centrepiece of its latest fall economic statement, which forecasts slightly deeper annual deficits over the coming years.

Finance Minister Bill Morneau had faced pressure from the business community to take the big step of lowering the corporate tax rate across the board as his response to major tax and regulatory reforms in the U.S.

In Wednesday’s economic update, Morneau chose a cheaper approach – but one that will still use billions worth of extra federal fiscal space to offer tax incentives for businesses that invest in Canada.

Speaking with reporters, Morneau said Canada is benefiting from “a very good situation” when it comes to the health of the economy and the labour market. After hearing from companies, however, the government decided to do more to encourage investors to open their wallets north of the border.

“We know that we have to consider investments in the future,” he said Wednesday shortly before tabling the fall update in the House of Commons. “That’s why we listened to and heard the anxieties of the business sector.”

As part of the announcement, a government backgrounder warned the American reforms could significantly erode Canada’s overall business-tax advantage compared to the United States.

By far, the biggest-ticket items among the proposed tax measures are changes that would enable businesses to immediately write off the full cost of some types of machinery and equipment, and allow companies of all sizes and in all sectors to expense a larger share of newly acquired assets.

The new write-offs alone are expected to lower federal revenues by about $14 billion over the next half-decade.

As part of its competitiveness plan, the government also proposed about $1.1 billion over the coming years towards efforts to open new markets for Canadian exporters. The amount includes a re-allocation of close to $800 million in infrastructure funds towards improving transportation capacity – at marine ports, in particular – to boost overseas trade.

Ottawa also plans to add another $800 million over five years to its strategic innovation fund, which supports “innovative” investments in all sectors.

A stronger economy has given the government about $22 billion in extra fiscal room over the coming years, compared to what federal forecasters projected in last February’s budget. But the new initiatives will also contribute to slightly larger-than-expected annual shortfalls, beginning next year.

The fiscal update contains no timetable to eliminate the Liberals’ deficits. The government has drawn almost daily criticism from the opposition Conservatives and some economists for failing to provide a timeline back to balance, especially with the economy running close to full strength.

Following the 2015 election, the Liberal government abandoned pledges to run annual deficits of no more than $10 billion and to balance the books by 2019. Instead, it has focused on reducing the net debt-to-GDP ratio – also known as the debt burden – each year.

With an eye on the 2019 election, the Tories’ parliamentary finance critic attacked the Liberals’ economic statement.

“That is effectively the platform that they’re running on today – that there will be deficits forever,” Pierre Poilievre told the House of Commons.

Poilievre warned the core of the government’s claim to fiscal responsibility – the slowly improving debt-to-GDP ratio – will come apart with the inevitable arrival of the next economic downturn. The government, he added, will then be forced to raise taxes or slash spending at a time when the economy will need the exact opposite response.

“In other words, they are putting our future in a reckless state of danger by spending our tomorrow on their today,” said Poilievre, who argued the Liberals have been fortunate to benefit from positive economic conditions outside their control – such as the booming U.S. and world economies.

Morneau was asked Wednesday if Canada will be ready for the next downturn and about concerns the government is continuing to run deficits during good economic times.

He insisted the government is on the right path by investing in the economy to help create jobs and to promote growth, while at the same time lowering the debt burden. Morneau warned some critics appear to advocating an “austerity” approach.

“For Canadians to be optimistic about their future, they need to see the prospect of jobs for them, for their children,” he said. “That’s what is going to keep our economy going.”

Morneau’s fall economic statement also proposes additional support for the country’s struggling journalism industry by enabling non-profit news organizations to take tax-deductible donations and by creating new tax credits – all of which are part of a plan expected to reduce government revenues by $600 million over five years.

One expert said the new accelerated investment write-offs will provide a boost to business, even though he thinks Canada’s corporate tax regime was still competitive even before Wednesday’s announcement.

“But I think there was a lot of pressure on them to do something in order to regain the relative advantage compared to the U.S.,” said Randall Bartlett, chief economist with the University of Ottawa’s Institute for Fiscal Studies and Democracy.