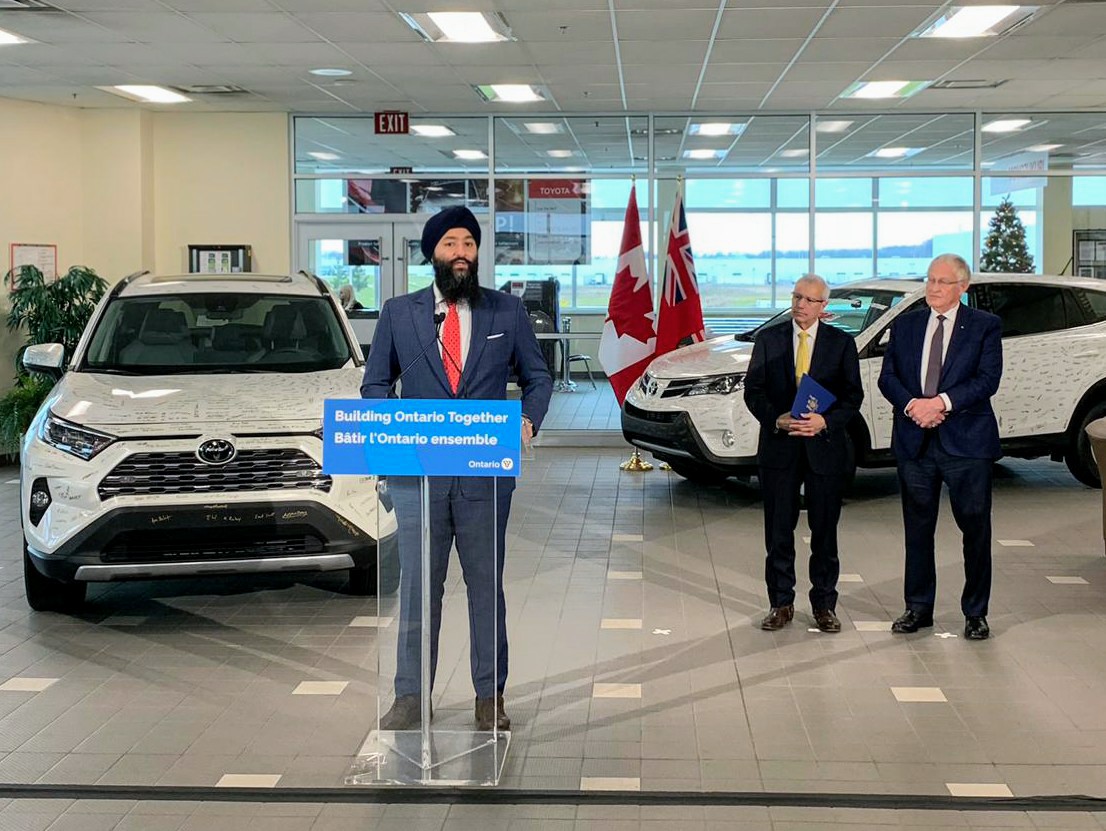 WOODSTOCK — Ontario is launching a provincewide Job Site Challenge to identify shovel-ready mega sites where automakers or other advanced manufacturers could invest by building a large plant.

Prabmeet Sarkaria, Ontario’s associate minister of Small Business and Red Tape Reduction; Vic Fedeli, minister of Economic Development, Job Creation and Trade; and Ernie Hardeman, minister of Agriculture, Food and Rural Affairs and local Oxford MPP; made the announcement at Toyota Motor Manufacturing Canada (West Plant) in Woodstock. The Toyota plant in Woodstock, which opened in 2008, is the newest auto plant in Ontario.

Ontario says the Job Site Challenge invites municipalities, economic development agencies and industrial property owners to propose mega sites — large tracts of land between 500 to 1,500 acres that are already zoned, or could be, for heavy industrial use. These sites should be serviced or serviceable by utilities, transportation networks and other support infrastructure.

“With smarter regulations and reductions in the cost of doing business in the province, we’re restoring the competitive advantage that made Ontario the economic engine of Canada,” said Sarkaria in a statement. “The Job Site Challenge will build on our investment strategy, help us compete with other North American jurisdictions for large-scale manufacturing investments and market Ontario as a competitive place to do business.”

According to the province, the Job Site Challenge is modelled on mega site programs that have helped several U.S. jurisdictions, like New York, Tennessee, Alabama and other states, to attract large-scale investments to build auto or other advanced-manufacturing plants.

The first shovel-ready sites are expected to be made available to investors in fall 2020.

“One of the biggest barriers that automakers face if they want to build or expand an auto assembly plant is availability of large-scale sites,” said Fedeli, also in a statement. “Through the Job Site Challenge, we’ll identify the best sites in the province that can help bring good-paying jobs to the community. A new auto assembly plant — like the eight we already have in Ontario — would create thousands of jobs for hardworking Ontarians.”

Ontario notes that the Job Site Challenge builds on the success of the province’s existing Investment Ready: Certified Site Program, which pre-qualifies smaller industrial properties across the province.

Proposals will be accepted between January 1 and March 31, 2020.