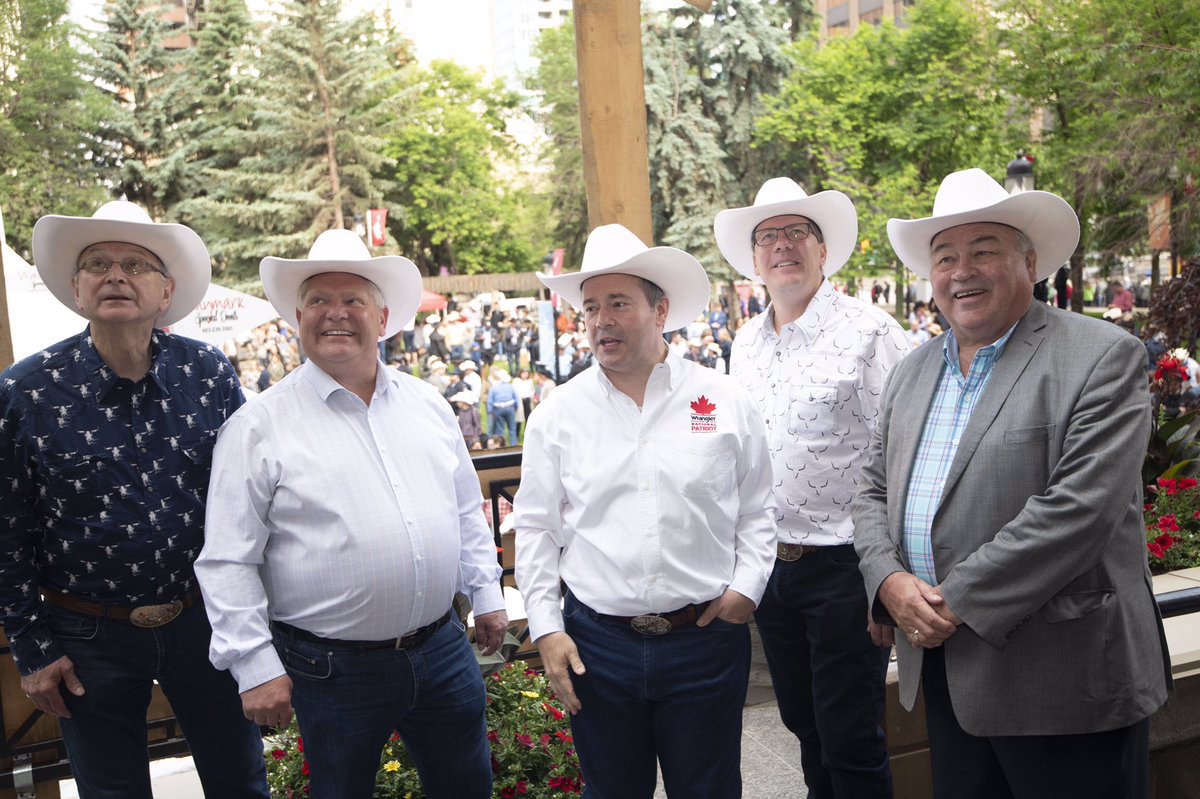 CALGARY—Five premiers with similar grievances against Ottawa gathered Monday for an informal confab in Calgary, where they shared notes ahead of this week’s first ministers’ meeting and took in some Stampede festivities.

All lead conservative parties with the exception of Bob McLeod of the Northwest Territories, where there is a consensus system.

“This was just a brief and fairly informal get-together of some like-minded premiers to talk about jobs, growth and prosperity,” Kenney said.

He said they discussed hurdles in getting Canadian resources to market, as well as their opposition to federal bills overhauling resource reviews and banning oil tankers from the northern B.C. coast.

Other premiers with similar concerns were invited, but some had scheduling conflicts, Kenney added.

Saskatchewan Premier Scott Moe, who will be chairing the Council of the Federation meeting in Saskatoon, said the Calgary meeting was not meant to be partisan.

“This isn’t an ideological table that we’re sitting at,” he said. “This is a table of mutual interest on how we can continue to create wealth in the communities we represent.”

Ontario’s Doug Ford, however, took shots at his province’s previous Liberal government, touted his government’s own tax-cutting and regulation slashing and revelled in the growing number of provincial legislatures now run by right-wing parties.

Earlier in the day, the visiting premiers were given white cowboy hats, a Calgary honour bestowed on royalty and other dignitaries, and western belt buckles.

They flipped and served up pancakes for a large, mostly friendly crowd at Kenney’s first premier’s Stampede breakfast since his United Conservative party swept to power.

Four of the premiers at the meeting also share common cause over fighting Ottawa’s carbon tax.

New Brunswick’s Blaine Higgs said neither he nor his colleagues deny climate is changing dramatically, but that he thinks innovation, not taxing people more, is the way to get carbon emissions down.

“Is the climate going to improve next year if we raise the carbon tax? No, it’s not going to change. It took a long time to get here,” said Higgs.

“But all of a sudden there’s this will by the current (federal) government to just tax people more and think it’ll get better because everyone will feel like, ‘I’m paying a guilty tax here.”’

The Northwest Territories government has set out a carbon pricing plan that meets Ottawa’s criteria, introducing a $20 per tonne tax effective Sept. 1 that would gradually increase to $50.

McLeod said climate change is affecting the North the most, yet people who live there contribute the least emissions.

“Your lifestyle affects us,” he said of southern Canadians.

But he said he also shares his colleagues’ concerns over the well-being of the oil and gas industry.

“We know that if the energy industry in Canada doesn’t recover, we’re going to be in trouble. So we are working with all of our southern provinces to move ahead,” he said.