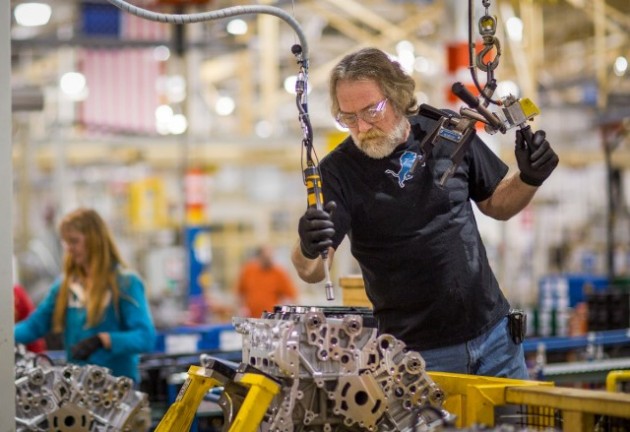 GM will invest more than $356 million in a new engine line in Flint, Mich. and driveline and powertrain components in Saginaw and Grand Rapids. PHOTO: GM

OTTAWA—Although Canadian vehicle manufacturers are benefiting from strong consumer demand for new vehicles in Canada and U.S., the industry’s future is not on solid ground.

Canadian car manufacturers are struggling to attract investment in new plant facilities, which will make it difficult to maintain current production levels beyond 2017, according to The Conference Board of Canada’s latest Canadian Industrial Outlook: Canada’s Motor Vehicle Manufacturing Industry.

“The phasing out of several models at GM’s Oshawa Flex and Consolidated plants by the end of 2016 could spell bad news for Canadian motor vehicle production,” said Sabrina Bond, Economist, Custom Economic Services, The Conference Board of Canada. “Securing replacement products will be critical to avoiding a steep decline for the industry starting in 2017.”

Highlights of the report include:

Industry production should see an uptick this year, thanks to strong vehicles sales in Canada and the U.S. New vehicle sales in the U.S. are projected to reach 17.7 million units this year, while Canadian sales are on track to reach 1.8 million units. From 2017 onward, however, production is expected to drop as model shutdowns at GM’s Oshawa Consolidated and Flex plants contribute to a loss of 167,000 vehicles. This is in addition to the annual production loss of 72,000 fifth-generation Chevrolet Camaros to Michigan at the end of 2015. In all, Canadian motor vehicle production is forecast to decline by 10 per cent in 2017 with average growth of less than 1 per cent through 2020.

Smaller car production is moving more and more to Mexico, so Canadian auto assemblers are increasingly specializing in the production of light trucks, which have been gaining popularity among Canadian and American consumers. In the first four months of 2016, lights trucks accounted for 65 per cent of new vehicles purchases in Canada. Meanwhile, smaller passenger cars remain less favoured by Canadian consumers.

This increase in sales of light trucks is welcomed news for Canadian auto assemblers as these types of vehicles are usually more expensive, and in turn, more profitable for the industry. However, there is growing evidence that this surge in demand for light trucks is the result of generous financial terms. As such, vehicle manufacturers should not bank on this as the new normal.

After hitting the $2.1 billion dollar mark in 2015, the Canadian vehicle manufacturers’ pre-tax profits are expected to fall to $2 billion this year and continue to gradually decline over the next three years. Cost containment efforts will allow profit margins to average a healthy 2.6 per cent over the next four years.

Parts production
The planned elimination of production of several Canadian-manufactured vehicles is expected to reduce domestic demand for auto parts. Fortunately, parts makers will be shielded from reduced production by a high reliance on exports to the U.S. market, where demand for parts will remain comparatively stable. All told, motor vehicle parts production is slated to post growth of 1.6 per cent in 2016, but production will fall 4 per cent next year.

On a more positive note, Canada’s auto parts manufacturing industry is taking advantage of several public innovation funds to develop world-class automotive technologies. With Ontario recently opening its public roads to pilot driverless technology programs, auto parts manufacturers are well positioned to capitalize on the existing automotive ecosystem in Southern Ontario and leverage partnerships with leading research institutions. Moreover, GM has recently announced it will expand its engineering and software work in Canada with focus on supporting the development of innovative new automotive systems and technologies for the future.

Overall, pre-tax profits for Canadian motor vehicle parts manufacturers are expected to reach $1.6 billion this year. Cost containment will also allow this industry to post average profit margins of 5.4 per cent between 2016 and 2020.