With municipal, provincial and federal categories, the CFIB's Paperweight Awards lampoon the most "misguided" government regulations 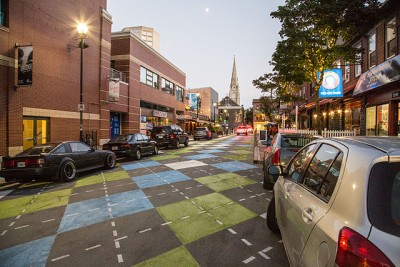 The CFIB criticized the Halifax Regional Municipality for tying up an Argyle Street restaurateur with red-tape this past year. PHOTO: Tony Webster, via Wikimedia Commons

OTTAWA—Canadian municipalities seem to have it out for patios.

Two years ago, Montreal borough mayor, Luc Ferrandez, forced the city’s restaurants to replace patio chairs made with PVC plastic for not meeting Montreal’s “aesthetic criteria”—a move that earned him one of the Canadian Federation of Independent Businesses’ 2015 Paperweight Awards.

Despite the ignominious honour, Canadian cities still seem intent on regulating patio space—and this year the CFIB responded in kind, awarding yet another Paperweight to municipal “patio police”—this time to the Halifax Regional Municipality.

“This year’s Paperweight winners represent ‘specific irritants’ that are costing small businesses time and money,” Satinder Chera, vice-president at the CFIB, said. “Whether it’s governments going back on their word, or forcing business owners to fill out online forms they don’t need to, or temporarily taking away a service without saying when it will be restored, these leading 2016 examples of red tape are ones that should be the easiest for government to fix.”

In Halifax, the CFIB said that one restaurant had had their patio railing bolted to the local sidewalk for 20 years with city approval—until they were told to use cinder blocks to support the railing instead.

“Another restaurant on the same street got its patio designs approved by the city, only to be told after it was built that the railing was a few inches too close to the sidewalk,” the organization said.

The small business group said both businesses faced fines of more than $1,000, and spent close to that amount working to comply with the new rules.

Beyond the patio pandemonium, Ontario’s recycling authority was also able to distance itself from its provincial competition, winning the gummy red tape distinction for “wasting everyone’s time.”

According to the CFIB, manufacturers and importers in the province are required to report on product packaging and recycling of printed paper to Stewardship Ontario through a long online form. Though small businesses are exempt from the process, they often get part way through before finding that out.

“After filling several parts of the form, the process abruptly stops without a clear explanation,” the CFIB said. “When users call Stewardship Ontario for clarification they are told their business is not required to report. They then have to find the poorly marked checkbox on the form which indicates that they are exempt.”

For the top tier of government, the Canada Border Services Agency took home the paperweight prize because of its decision to drop its website for small businesses.

Described as a “key source” for SMEs looking for information about trade with the U.S., the CBSA abruptly shut down the small business section of their website, as well as the call centre number small business owners could call to ask questions.

“The website no longer has any SME-specific information,” the CFIB said. “The CBSA says the removal is temporary, while they move to the consolidated Canada.gc.ca website, but no timeline has been given, leaving business owners without access to government trade-related information tailored to small importers.”

Despite the good-natured tone of the awards, the CFIB does take red tape seriously.

The organization pegs the cost of all regulations on Canadian businesses at $37 billion each year, and argues about one-third of that figure represents unnecessary red tape.