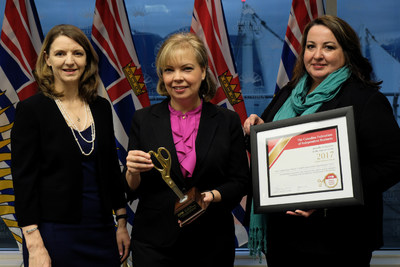 TORONTO—The Canadian Federation of Independent Business (CFIB) announced Jan. 27 that Christy Clark, premier of British Columbia, and Coralee Oakes, minister of Small Business and Red Tape Reduction for B.C., have been named the winners of their Golden Scissors Award for leadership and producing results in cutting red tape for small businesses.

The Golden Scissors Award is a part of CFIB’s annual Red Tape Awareness Week, a campaign aimed at drawing attention to regulatory inefficiencies and waste.

In advance of their first Red Tape Reduction Day, held Mar. 2, 2016, the B.C. government conducted an online consultation where more than 400 ideas were submitted from the public. Each idea was reviewed and many have been acted on.

As a result of B.C.’s Red Tape Reduction Day:

“Once again, the Golden Scissors Award has brought together an impressive list of finalists from across Canada. The exceptional leadership shown by Premier Clark and Minister Oakes is a clear example of government officials’ outstanding commitment to cutting red tape on small businesses,” said Laura Jones, executive vice-president at CFIB.

The winners, chosen from nominations from across the country, received a trophy, a framed certificate and recognition on the CFIB website, Facebook page, and other small business publications.

In addition to the winners, four honourable mentions were also announced today.