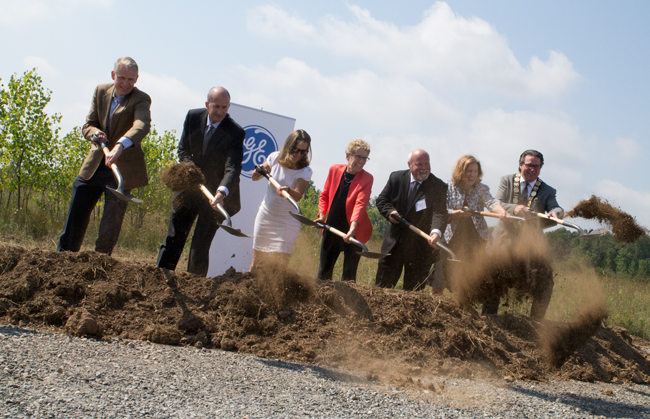 WELLAND, Ont.—GE has broken ground on a new $240 million reciprocating engine plant a stone’s throw from the U.S. border in Welland, Ont.

Ontario Premier Kathleen Wynne and Canadian Minister of International Trade Chrystia Freeland, along with several GE executives and local politicians, took their shovels to the ground Aug. 26 to commemorate the start of construction on the new greenfield site.

GE plans to kick work on the new “Brilliant Factory” into high-gear over the next year and a half, installing equipment in the third quarter of 2017, before starting to ramp up production at the approximately 450,000 square-foot facility by early 2018.

“It’s a plant that is reimagining how we manufacture,” Elyse Allan, president and CEO of GE Canada, said at the groundbreaking.

“It incorporates all the concepts of lean: speed with excellent quality—coupled with everything that is now available and that is coming down the pipe in digital technology, with the latest in software developments,” she added. 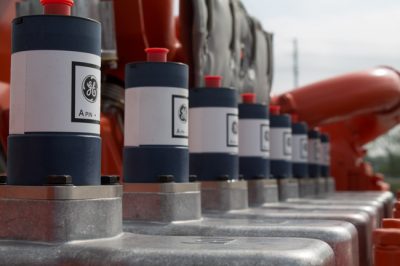 Lights-out machining, automation, wireless sensors and gauges, and data analytics are among the long list of technologies GE plans to employ at the “Brilliant” plant, which is the first GE site in Canada to include that moniker. As well as gas engines, the facility will make compression components and parts for mechanical drive and power generation.

Though it will become a base for GE’s Distributed Power business, the site may also support the industrial conglomerate’s Transportation division by manufacturing diesel engines components.

The major investment is a coup for the Ontario government, which has been working to shore up the province’s still-reeling manufacturing base after the 2008 downturn. The plant will bring 220 jobs to the southern Ontario city by the time it ramps up to full production in mid-2018.

The province has committed $26.5 million to support the project, while GE will invest approximately $214 million (US$165 million). To build the new plant, GE tapped Edmonton-headquartered PCL Constructors Canada Inc. to serve as the general contractor. 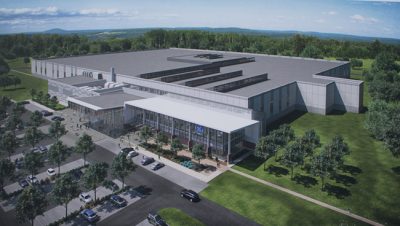 The new plant will cover 450,000 square-feet, while GE will also leave room on the site for a possible second phase of the project

Perhaps best-known for its canal, Welland is in the Niagara Region just south of St. Catharines, Ont. The new plant will be only a few hundred metres from the famed canal—which was originally built in 1829 to connect Lake Erie and Lake Ontario—and still plays a vital role in shipping along the Saint Lawrence Seaway.

GE said it chose Welland for its access to road, rail and marine infrastructure, its proximity to the U.S. border and the availability of skilled labour in the region. Experiencing similar shocks to its manufacturing base as other parts of Ontario have over the past decade, the plant is expected to give Welland a much-needed boost.

Fairfield, Conn.-based GE announced it would move its reciprocating engine production from Waukesha, Wisconsin to a then-undetermined Canadian locale last year, before settling on Welland in June. The company decided to make the move north of the border in part because of the uncertain future of the U.S.’s Export-Import Bank, as well as to tap into support from Export Development Canada. About 80 per cent of the plant’s production will be for export.

Though the company is optimistic about the engine industry, the investment comes at a tough time for the cyclical business. Nevertheless, Heiner Markoff, president and CEO of GE’s Water and Distributed Power, said it was a great time to build the plant.

“We can’t wait for the segment to come back,” he said. “As other engine manufacturers are going through this downturn we hope we’ll see some light at the end of the tunnel… When the segment’s coming back we should be ready to run. In that respect, timing is pretty opportune.”

The $240 million plant is officially Phase 1 of the project; GE is leaving about half of its Welland lot empty for a possible second phase, but has not released a timeline.