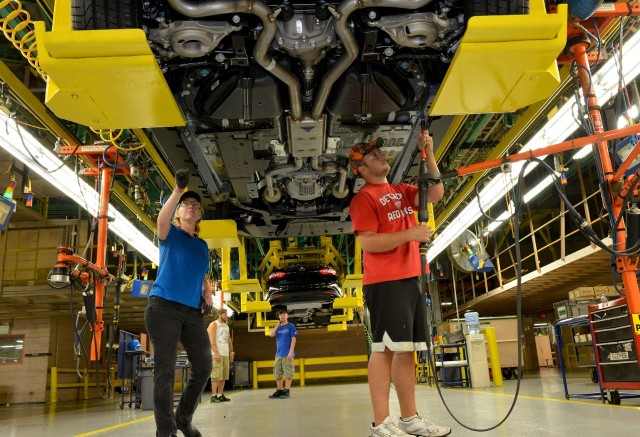 The automaker is planning a $700 million investment in autonomous technology at the Michigan plant that currently builds the Mustang. PHOTO: Sam VarnHagen/Ford

The automaker said it will redirect close to half of the funds to upgrade its Flat Rock Assembly Plant. The $700 million investment in the Michigan facility will create 700 jobs at a time automakers and other major American manufacturer have come under fire for relocating operations south of the border or overseas.

The announcement coincided with a President-elect Donald Trump Tweet that criticized General Motors for producing the Chevrolet Cruze south of the border—a claim the Ford competitor largely rejected.

Ford’s San Luis Potosi plant was expected to create about 2,800 jobs in the central Mexican city.

Despite the change of plans, Ford still intends to shift production of its the next-generation Focus to Mexico.

The move was an election campaign flash point, with Trump continually criticizing the company for potential job losses—though Ford maintained new car programs for its U.S. plants would mean no U.S. jobs would be lost. After the election in November the company reaffirmed its plans to move small car production out of the U.S.

While Ford did not indicate Trump had any role in the $1.6 billion change of course in a statement released Jan. 3, Mark Fields, the company’s president and CEO said Ford is “encouraged by the pro-growth policies” Trump and the new Congress have committed to.

“We believe that these tax and regulatory reforms are critically important to boost U.S. competitiveness and, of course, drive a resurgence in American manufacturing and high-tech innovation,” Fields said at a press conference in Flat Rock.

The automaker said it will assemble the Focus compact at its existing plant in Hermosillo, Mexico, which currently builds the Ford Fusion and Lincoln MKZ.

To make up for the loss of the Focus program, Ford intends to build two “new iconic products” at the Michigan Assembly Plant in Wayne, Mich. It released no further specifics about what new vehicles are destined for the Detroit-area plant, but said the shift will safeguard the plant’s 3,500 workers.

Ford was more forthcoming about the $700 million in funding for Flat Rock. It said the investment will support a steering-wheel-less hybrid autonomous vehicle Ford plans to launch in 2021.

Meanwhile, the company also confirmed more than half a dozen new electric vehicles, including hybrid versions of its F-150 pickup and Mustang.

Along with hybrid variants of some of its most popular models, Ford is planning a fully-electric small SUV with an estimated range of 300 miles by 2020.