The evolution of the green car

While alternative-fuel vehicles have made great strides in the last 15 years, there are still improvements to be made to get consumers to buy more of them

Although the first mass-market electric cars appeared at the turn of the 20th century, their popularity waned until the introduction of the hybrid electric vehicle we hear so much about today.

In 1900, close to 40 per cent of cars in the United States were powered by electricity, while only half of that number ran on gasoline. The remaining 40 per cent were steam-powered.

Electric car sales peaked in the early 1910s, but the lack of a battery recharging infrastructure, slow speeds, limited range and the widespread availability of cheap gasoline soon rendered electric cars virtually obsolete by the 1920s.

Toyota put electric cars back in the picture when the Prius debuted in Japan in 1997, making it the first mass-produced hybrid electric car. In 2000, the Prius began selling worldwide and, today, it is still the best-selling hybrid on the plane. It has sold three million units as of July, 2013. 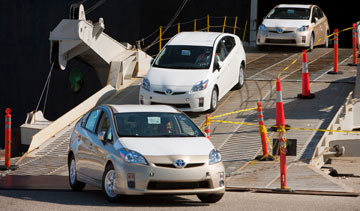 Along with the Prius, now in its third generation, the Prius family includes the larger Prius v, the smaller Prius c and the plug-in version of the original, the Prius Plug-in. Despite several new challengers, the Prius remains the most fuel efficient vehicle in its class in Canada.

“For model year 2014, the Toyota Prius and Prius c were recognized as the most efficient advanced technology vehicles of the mid-sized and subcompact categories,” says Guillaume Bérubé, acting media relations advisor at Natural Resources Canada (NRC).

NRC recognizes the most fuel efficient new light-duty vehicles in their class sold in Canada each model year. Top performers have the lowest estimated annual fuel use, based on 20,000 kilometres driven with a mix of 55 per cent city and 45 per cent highway.

There are more than 50 alternative-fuel cars, including hybrid electric and plug-in electric vehicles (EVs), available in Canada alone, where there was only one at the turn of the century.

“The Toyota Prius was instrumental in revolutionizing the green car market in North America and around the globe,” says Petrina Gentile, automotive writer for the Globe and Mail.

The number of CO2 emissions that have been eliminated by Toyota hybrids alone is impressive.

“Toyota calculates that as of December 31, 2013, Toyota hybrid vehicles have resulted in approximately 41 million fewer tons of CO2 emissions than would have been emitted by gasoline-powered vehicles of similar size and driving performance,” says Toyota Canada director Sandy DeFelice.

“What the Prius did is prove that hybrid technology is a very workable technology,” says Dennis DesRosiers, president of DesRosiers Automotive Consultants.

But while the Prius is a proven success in both the technology and sales departments, not to mention the darling of Hollywood celebrities, it’s not really a driver’s car, according to some automotive journalists.

“On the plus side, the Prius has reduced our dependency on oil, reduced our carbon footprint and reduced our fuel bills,” says Gentile. “On the negative side, it’s a boring, bland vehicle that doesn’t stand out on the road. It’s not the most fun to drive either.”

Adds automotive journalist and car collector Nika Rolczewski, “You don’t get into a Prius and have your heart rate go up.”

That’s where a luxury EV such as the Tesla Model S excels. 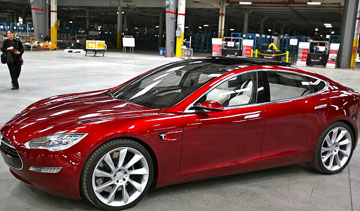 With 416 horsepower and a zero-to-100-km/h acceleration rate of just 4.4 seconds, the Tesla can hold its own with exotic supercars. And with 480 km per charge, there’s no range anxiety.

For some, the $103,000 starting price of a Model S is prohibitive. But Rolczewski, who owns nine Ferraris with her husband, likes the Tesla because it marries the luxury of a supercar with the environmentally-friendly benefits of an electric drivetrain.

“It’s exciting in what they’re trying to do,” DesRosiers says about Tesla. But he says the Model S represents only one per cent of the Canadian EV market.

“My own personal view is that, at this point, consumers have to make too much of a compromise and pay more [for EVs and hybrids],” says DesRosiers. “They don’t want to get less and pay more.”

He says that cars today are 20 per cent more fuel efficient than they were 15 years ago, but they also have, on average, 100 more horsepower, because consumers have demanded it.

“Government needs to regulate the consumers, not the automakers,” says DesRosiers. “But government is terrified of regulating consumers.”

He says that, even though government and automakers are subsidizing hybrids and EVs, reducing the premiums to between $2,000 to $5,000 more, only 10,000 hybrids were sold in Canada last year.

Many factors determine Canadians’ car-buying habits: price, reliability, performance, size and safety are the top considerations, while being environmentally friendly is at the bottom of the list, says DesRosiers.

“Hell, if I have a choice, I’ll buy the diesel over anything else,” he says.

Booth is also a big fan of diesels.

“The reason to prefer diesels over hybrids are two-fold. The first is that oil burners are almost universally more economical on the highway,” Booth says. “Anyone who does a lot of constant, high-speed cruising would be foolish to buy a hybrid over a diesel.

Booth says that the best possible combination could be a diesel hybrid, the electrification lending the urban frugality common to hybrids while retaining the highway performance of compression ignition combustion.

The other reason is that diesel’s real-world fuel economy more closely emulates the sometimes unrealistic ratings offered by Natural Resources Canada adds Booth. “Indeed, while diesels can often achieve everyday consumption within 10 per cent of the posted rating, hybrids generally consume 25 per cent to 30 per cent more than their posted ratings when driven in a similar manner.”

The government is working with automakers to make the ratings more accurate by taking into account different driving conditions.

“Beginning with model-year 2015 vehicles, to better reflect typical on-road driving conditions and styles, the Government of Canada has introduced an enhanced methodology for determining fuel consumption ratings by integrating three additional tests to the city and highway fuel consumption ratings to account for driving at higher speeds with more rapid acceleration and braking, using the air conditioner and cold-weather driving conditions,” says the NRC’s Bérubé.

To address consumers’ recharging and range issues, Toyota is looking at another alternative-fuel technology.

“Toyota is committed to releasing a commercially available hydrogen fuel cell vehicle in select markets in 2015,” says DeFelice. “Toyota believes fuel cells are the most promising environmental vehicle technology since hybrids, because they offer all of the zero-emission benefits of electric vehicles without the drawback of the technology such as long recharge times and limited driving range.”

Tesla is also doing its part to address range issues with a Supercharger network of more than 3,400 throughout Canada and the U.S. While the Model S can be recharged at a rate of 45 km/h using a high-amperage 240-volt outlet, a Tesla Supercharger provides a 50 per cent charge in just 30 minutes.

Tesla is also tackling the price issue with the introduction of two new, more affordable models over the next three years.

“Tesla’s mission is to catalyze the market for EVs. To do that, we need to bring compelling mass-market electric cars to market as soon as possible,” says Shanna Hendricks, the automaker’s communications manager. “Tesla will begin delivering the Model X, our crossover vehicle, in 2015, and introduce our third-generation vehicle in 2017.”

Like the Model S, the compact Model X will be powered by electric motors and lithium-ion batteries. The Generation 3 model will be priced around $30,000.

While alternative-fuel vehicles have made great strides in the last 15 years, there are still improvements to be made to get consumers to buy more of them. With new and better technology available every day, it shouldn’t be long before we’re all driving green cars.

Patricia Cancilla is a Toronto-based automotive and business writer