Two of China's biggest state-owned automakers unveiled models they said can travel 600 kilometres on one charge, or nearly double the range of global competitors 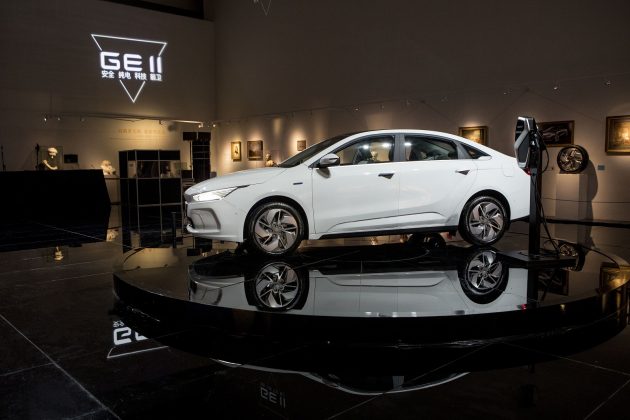 PHOTO: The Geometry brand is Geely’s vision of the future in which technology is used to create a sustainable environment and safe mobility/Geely Holding Group

Two of China’s biggest state-owned automakers unveiled models they said can travel 600 kilometres (370 miles) on one charge, or nearly double the range of global competitors. If that can be achieved, it would raise the standard for an industry trying to compete with gasoline models by defusing “range anxiety” or fear of being stranded with a dead battery.

China’s communist leaders have spent heavily seeking to make the country a leader in electrics. They’re now shifting the burden to automakers by imposing sales targets. That requires brands to create consumer-friendly models at a time when they are struggling with a sales slump.

BJEV, one of the biggest electric producers by sales volume, unveiled the EX3 sedan, which it said can travel up to 630 kilometres (390 miles) on one charge. Ma said it is one of five new electric models under a plan to “transform and upgrade” BJEV into a brand that can compete without subsidies.

General Motors, Nissan, China’s Geely Auto and other brands displayed dozens of electric models, from luxury SUVs to compacts priced under $10,000. The auto show, the world’s biggest, opens to the public Saturday following a preview for media.

China’s leaders have been promoting “new energy vehicles” for 15 years with subsidies for developers and buyers. That, along support including orders to state-owned utilities to blanket China with charging stations, is helping make the technology a mainstream product.

“After an initial push from the government, now customers are really wanting and demanding EVs,” said Nissan’s director of electric vehicles, Nic Thomas.

Electric vehicles are key for government-led development of Chinese global competitors in technologies from robotics to biotech.

China lags Europe, the United States and Japan in battery and other vehicle technology but is developing fast. It has about half of global production capacity for batteries, an electric car’s biggest and most expensive component.

Last year’s Chinese sales of pure-electric and hybrid sedans and SUVs soared 60% over 2017 to 1.3 million, or half the global total.

At the same time, industry revenue was squeezed by a 4.1 per cent fall in total Chinese auto sales to 23.7 million vehicles.

That skid that worsened this year as first-quarter sales fell 13.7% from a year ago.

Subsidies end next year. Under the new system, automakers must earn credits for sales of electrics equal to at least 10% of purchases this year and 12% in 2020. Longer-range vehicles can earn double credits. That means some brands can fill their quota if electrics make up as little as 5% of sales.

Most automakers still lose money on each electric vehicle. But industry analysts say that as the cost of batteries and other components falls, electrics could become cost-competitive with gasoline models and profitable for their producers within five years.

In Shanghai, the GAC electric car unit GAC New Energy unveiled the Aion LX SUV, which it said can travel 600 kilometres (370 miles) on one charge. The unit’s deputy general manager, Xi Zhongmin, said no price or release date have been decided.

Most Chinese brands target the domestic market, but Geely has global ambitions.

Its electric brand, Geometry, displayed a sedan with an advertised range of up to 500 kilometres (310 miles) on one charge. Geely says the Geometry A, unveiled last week in Singapore, will be marketed worldwide.

VW showed off a concept electric SUV, the whimsically named I.D. ROOMZZ, designed to travel 450 kilometres (280 miles) on one charge. Features include seats that rotate 25 degrees to create a lounge-like atmosphere.

China is a top market for global automakers, giving them an incentive to go along with Beijing’s electric ambitions.

Also Tuesday, Nissan Motor Co. and its Chinese partner displayed the Sylphy Zero Emission, an all-electric model designed for China. Based on Nissan’s Leaf, the lower-priced Sylphy went on sale in August.

Mercedes Benz displayed its first all-electric model in China, the EQC 400 SUV, with a 400-kilometre (280-mile) range. It is one of 10 electrified models the German automaker says it will release worldwide, with most made in China.

Also this week, Mercedes said it will launch a roadside “butler service” in China offering recharging for drivers who run out of power and other services.

“We want to take away every reason a customer might say, umm, is it really time go electric?” said Hubertus Troska, a Daimler AG board member.