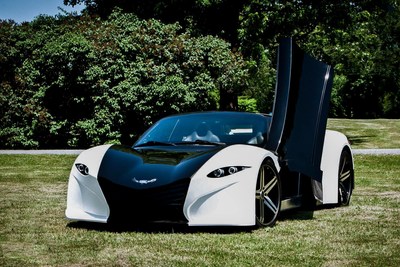 MENLO PARK, Cali.—You can own a stake in automotive history for as little as US$200.

After gaining approval from the Securities and Exchange Commission, American automaker Dubuc Motors can now sell equity shares to accredited and unaccredited investors through its website, allowing people to invest in the U.S. and internationally. The minimum investment is $200.

“We have been pleased with the response from the crowd. It’s exciting to see a community of game changers and trendsetters jump on board as shareholders of our company early on,” said Mike Kakogiannakis, co-founder of Dubuc Motors.

The 370-mile range Tomahawk accommodates the big and tall, seating drivers up to 6’5″ comfortably. The rear seats and front and rear cargo space also provide the Tomahawk with more utility than other luxury sports cars.

“People have embraced the idea that the Tomahawk, although an exotic sports car, can be as practical as a sedan,” said Kakogiannakis.

Dubuc’s first commercialized model is currently the only four-seater electric car on the market that goes 0-60 mph in under four seconds and sells for under $150,000.

Dubuc Motors is a self-funded company launched in 2013, but its founders spent 13 years in research and development on vehicles like the Tomahawk. Future models will be built from a universal chassis, which is currently used as the foundation for the Tomahawk.

The company will be a low-volume manufacturer, with an expected production of 1,500 units per year.