by Tom Krisher And Dee-Ann Durbin, The Associated Press  June 1, 2017

Tesla, the disruptive teenager in the U.S.'s well-consolidated auto industry, continues to defy the odds as century-old veteran General Motors looks for answers in the cutthroat, low-margin business 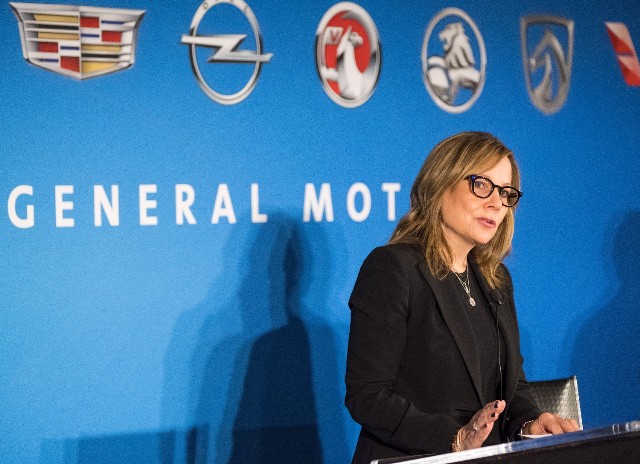 Buyers can be confident because Chevy has 3,000 U.S. dealers to service the new electric vehicle, she said. The implication was that Tesla, with just 69 service centres nationwide, can make no such promise.

The uncharacteristic insult from Barra was designed to highlight the difference between 108-year-old GM and Tesla, a disruptive teenager. It also acknowledged a budding rivalry that could help determine whether Detroit or Silicon Valley sets the course for the future of the auto industry.

The tale of the tape favours GM. It has made billions in profits since returning to the public markets in 2010. GM got the Bolt, a $36,000 car that goes 238 miles per charge, to market before Tesla’s Model 3. Tesla, the 14-year-old company led by flamboyant CEO Elon Musk, has never posted an annual profit.

Yet, as both CEOs face shareholders for annual meetings next week, it is Barra who must explain to skeptical investors why GM’s future is as bright as Tesla’s.

GM’s stock is trading around the $33 price of its initial public offering seven years ago. During that time, Tesla shares have soared more than tenfold to $335. Wall Street now values Tesla at about $55 billion, compared to around $50 billion for GM.

Despite efforts to paint themselves as technology companies, automakers can’t shake their giant, capital-intensive global manufacturing operations. The huge investment needed to build vehicles yields low profit margins compared with tech companies that make software or cellphones, says Michael Ramsey, an analyst with Gartner. GM’s net profit margin in 2016 was 5.7 per cent. By comparison, Alphabet Inc., parent of Google, had a 22 per cent margin.

Although it’s an automaker, Tesla started in the tech bucket and remains there in the eyes of investors and buyers, Ramsey says.

Tesla’s electric cars are the envy of the industry, and its semi-autonomous technology is among the most advanced on the road. Musk says Tesla’s California assembly plant_ which used to be GM’s—will soon be among the most efficient in the world. And it’s branching into areas with potential for bigger returns, including solar panels, energy storage and trucking.

“Tesla is absurdly overvalued if based on the past, but that’s irrelevant. A stock price represents risk-adjusted future cash flows,” Musk tweeted in April.

Still, Musk can’t risk any missteps as Tesla pivots from a niche manufacturer of 84,000 high-priced cars per year. The Model 3 sedan, Tesla’s first mainstream car, is due out later this year, but previous launches have been plagued with delays. Tesla has yet to prove it can build high-volume vehicles with quality and reliability, as GM does. Musk aims to make 500,000 vehicles per year in 2018; GM made more than 10 million cars and trucks last year.

GM, too, is stretching into new areas. Its Maven car-sharing service has 35,000 members in 17 North American cities, and it’s providing cars for ride-hailing services. GM is developing autonomous cars with Cruise Automation, a software company purchased last year. Its SuperCruise semi-autonomous driving system, due out this year, is designed to be safer than Tesla’s.

And GM isn’t the only automaker with a stagnant stock price. Of the seven bestselling carmakers in the U.S., only Toyota and Fiat Chrysler have seen significant growth in seven years. Ford, Honda and Hyundai all have lost value.

“Investors and the financial markets are much more interested in investing in the potential of what might be huge than in the reality of what’s already profitable and likely to remain so for years to come,” says Sam Abuelsamid, a senior analyst with Navigant Research.

Abuelsamid says GM could better trumpet its technology achievements. For instance, it scarcely markets the Bolt. By contrast, Musk builds hype with nightclub-like events for Tesla owners and Twitter banter with 8.8 million followers.

“The only way you can get people to perceive you in the same light as a company like Tesla is to demonstrate it,” Abuelsamid says.

Musk is crucial to Tesla’s success. The risk-taking billionaire founded PayPal and rocket company SpaceX before taking over Tesla. He espouses big ideas like Hyperloop high-speed transportation and colonizing Mars.

Barra, on the other hand, is a methodical engineer who rarely strays from script. She has only 29,500 Twitter followers. She’s a GM lifer who earned a company-paid MBA from Stanford; Musk left a Stanford graduate physics program after just two days to form a publishing startup.

“Mary is like a normal high-level performing executive,” Ramsey says. “Elon Musk is like an almost unrivaled superstar, even in comparison to Silicon Valley executives.”

Still, the big changes in the auto industry are in the early stages. Electric vehicles make up less than 1 per cent of global auto sales and fully self-driving cars are years away. The economy can falter and company fortunes can shift. Already this year, sales in the U.S. and China are slowing, and GM pulled out of the European and Indian markets because they weren’t profitable.

GM knows the ups and downs of auto sales, but Tesla will have to learn to manage them. If the Model 3 is late and Tesla sales fall, its stock price could drop and reduce Tesla’s access to cheap capital, Ramsey says.

“I don’t think they’re completely immune to economic cycles,” he says. “That will be when we really know if Tesla can maintain this out-of-whack share value with their fundamentals.”