OCB wishes the company well, but says it no longer qualifies 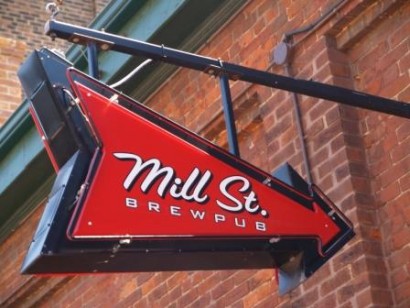 Though Ontario Craft Brewers have kicked Mill Street from its ranks, the organization wished the business well and said it expects the deal to be good for craft brewers. PHOTO: Dave Minogue, via Wikimedia Commons

Following the Labatt buy, OCB announced Mill Street will no longer qualify for membership in the organization. Membership is restricted to breweries producing less than 400,000 hectolitres.

“Of course, Mill Street would no longer qualify under this new ownership structure, just as Creemore did not qualify when it was sold to Molson,” the organization said.

Despite the loss of Mill Street, however, the organization sees the deal as a positive indicator for the industry.

“It’s always good news when one of the largest brewers in the world buys one of your members,” John Hay, president of OCB, said. “It means we have created a winning formula which the larger brewers clearly cannot create in-house and must go outside to buy.

OCB pointed out a “real growth spurt” of new breweries in Ontario when Molson bought Creemore in 2005.

“Because people recognized the excitement and potential of craft brewing. The industry grew from about 30 operating brewers to approximately 150 within five or six years,” Hay said. “We continue to be very excited about the future.”

OCB wished Mill Street well, thanking them for their contributions to the industry.