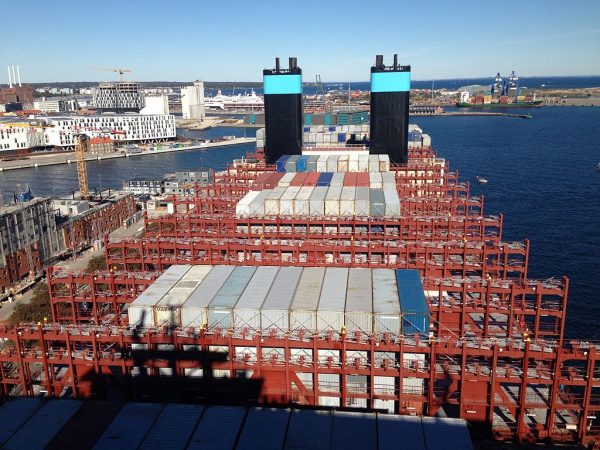 MONTREAL – The Canada Border Services Agency and the Port of Montreal have signed on for a trial run of a technology that aims to streamline freight shipping using the power of blockchain.

The federal customs agency and the country’s second-biggest port said they’re dipping their toes into a digital database that functions as a “distributed ledger,” sharing and syncing up data from ocean carriers, ports and wholesalers from Singapore to Peru.

But tugging the shipping world into the digital age could incur headwinds, as data sharing depends on co-operation among competitors and security remains an open question, experts say.

“When you have a container ship leaving, let’s say a port in Mombasa and going to a port in North America, it can pass through 30 regulatory bodies and port bodies, and all of the interaction currently is paper-based.”

Since TradeLens was launched in August, more than 90 organizations have come on board, including the ports of Halifax, Singapore and Rotterdam, the container carrier Pacific International Lines and customs authorities in Australia and the Netherlands.

Global collaboration among competitors could be key to maximizing the benefits of a blockchain-fuelled platform.

“That’s the only way that it’s going to take off,” said Inma Borrella, who leads the blockchain research team at the Massachusetts Institute of Technology’s Center for Transportation and Logistics.

Paper documentation is more prone to error and risk, but forms part of established supply chain habits in a creaky industry, she said.

“Ocean freight in particular is very slow in tech adoption. So that is one of the barriers.”

“There’s interest. All of these companies are exploring the technology. But the return on investment is still not clear,” Borrella added, highlighting TradeLens as the biggest effort so far to wrangle stakeholders into a single machine-learning system.

Pairing competitors could be tough, but smoother dispute resolution is one potential outcome, with a single, shared record of the cargo’s path from castoff to docking clarifying who is responsible in the event of cargo damage or loss.

“What blockchain can provide is a single version of the truth,” Borrella said.

Product bundling is another path to efficiency, said her colleague Maria Jesus Saenz, who leads research into digital supply chain transformation at the MIT centre.

Companies such as Pepsico, Kimberly-Clark and Procter & Gamble, whose products often share retail destinations, have already taken advantage of data-sharing to achieve up to 30 per cent savings on logistics, according to her research.

“The flows can be bundled very easily, because they have the same nodes in their networks,” she said, pointing to shared containers and transport resources.

Questions still swirl around security. On the surface, blockchain software appears more immune to human error than paper documents. But cryptocurrencies such as Bitcoin, which helped hatch blockchain technology, have been hacked over the past decade.

“It’s still a concern, definitely,” Saenz said. “The question is if it is 100 per cent protected or not. I am doubting that.”

The length of the pilot project with CBSA and the Montreal port has not been finalized, IBM said.

“We are convinced that joint work on a global scale is part of the key solutions to achieve a better flow of information and goods for the benefit of clients and partners,” said Sylvie Vachon, chief executive of the Montreal Port Authority.