Canada’s Natural Resources Minister to build up partnerships with U.S. 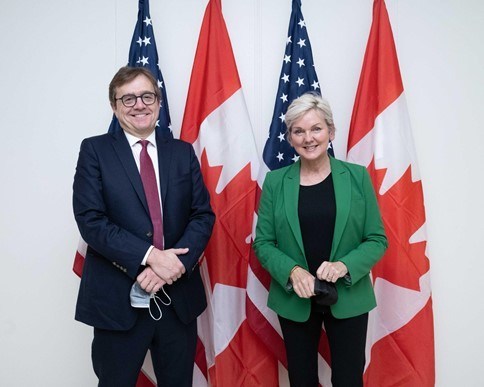 WASHINGTON — Natural Resources Canada has put out a statement condemning Russia’s efforts to use energy as a tool for influence and coercion following the most recent developments in the country’s war against Ukraine.

“We are working closely with our international partners, while reinforcing our shared climate goals, to maintain the stability of global energy markets and to secure energy supply chains,” the statement reads.

In the next year, they plan to strengthen the Canada-US critical minerals action plan. Additionally, they will work to identify key locations for cross-border hydrogen hubs and corridors. They will also take measures to accelerate the implementation of the MOU signed between the U.S. Department of Energy and Natural Resources Canada concerning cooperation on energy, which includes Canada’s commitments to achieve a net-zero emissions electricity grid by 2035.

“Canada and the United States share a common border, common interests and common values. We have an opportunity to work actively together to accelerate effective implementation while concurrently building an economy that will provide jobs and economic opportunity for all. I look forward to working with Secretary Granholm to make this happen,” said Natural Resources Minister, Jonathan Wilkinson in a statement.