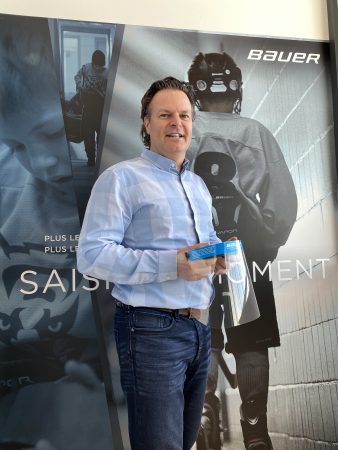 Bauer Hockey‘s facility in Blainville, Que., is usually producing skates and equipment for some of the best athletes on the planet, but pro hockey leagues across the world have shut down due to COVID-19, and the virus has created pressing concerns elsewhere.

This situation, both a disruption in business as usual and a spike in demand for personal protection equipment from health care providers and first responders, stirred the manufacturer, whose corporate office is in Exeter, New Hampshire, to pivot production in Blainville to making medical face shields. The company’s factory in Liverpool, New York, which makes lacrosse equipment under the Cascade and Maverik brands, did the same.

Together, the factories say they have delivered tens of thousands of face shields so far, and have plans for production of 2.25 million units through the end of May.

“The prime minister asked for manufacturers in Canada to step up and do something to help and make a contribution … The same day, the New York governor asked the same thing,” Bourgeois said.

He continued, “We have two factories, and when the crisis started, our businesses were facing that nobody was playing sports. We looked at that and said ‘what can we do?’”

He and his team put in a call to their designer and said, “‘We feel that face shield visors should be something we can come up with.’” 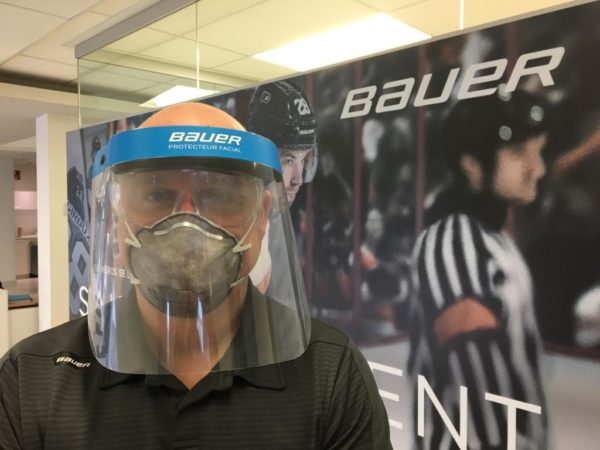 Bourgeois explained that the decision to make face shields came because they already had the materials on hand, for making hockey visors and helmets. “We have all the equipment, all the machinery, we know how to do it, we know all the metrology for the head.”

Each of Blainville and Liverpool came up with their own design, then each facility reached out to its supplier base and started to figure out how many units they were going to build.

Bourgeois said, “At first we said we would make 10,000, but since we weren’t certified by medical companies we didn’t think hospitals would buy from us. We saw a need from firefighters, police, first responders, anybody who would like to protect themselves.”

He continued, “A contact from the police department in Montreal then asked for 40,000. They said they couldn’t get their hands on face shields because they are all going to hospitals.”

The next step was to spread the word more widely. “We then called a reporter at RDS [a Quebec-based French-language sports network] to get our story out. He posted his article and he got about 70,000 views,” Bourgeois said. “Now people are calling me all over the place and I cannot keep up. We started doing orders online to handle the volume. There was demand from drug stores, grocery stores, first responders, factories. In 12 hours we had 100,000 requests.”

Bourgeois and his team then received a call from the Quebec government, requesting 400,000 faces shield, and inked a deal with the federal government for 1 million units.

As the orders ramped up, Bourgeois said he and his team worked to prioritize orders, health care being the top priority, “but we also wanted to honour all of the order received.”

“Our original minimum order quantity (MOQ) was 10, then we raised it to 100, then 250, and now we’re taking much bigger orders.” He continued, “It’s the same kind of work shipping 50,000 or shipping 10. We wanted to serve as many people as we could, so that’s the reason we changed our MOQ. We told our smaller customers we couldn’t keep up with demand.” 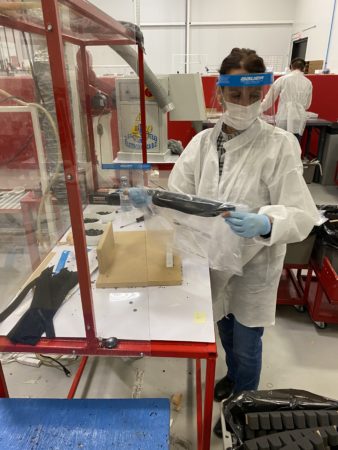 Demand for the face shields has skyrocketed.

As a gesture of goodwill and a solution to those whose orders couldn’t be satisfied, Bauer and Cascade actually released the manufacturing instructions for their face shields.

Bourgeois explained further, “When we realized we couldn’t keep up with demand, we decided to post our engineering specs to our website. It’s CSA-approved, if you build it that way you have a very good shield. Now people are making our design and having success doing it.”

However, while Bauer has released the plans publicly, it is only providing leads to manufacturers who meet certain standards. Bourgeois said, “Bombardier is making a similar mask based on our design. They’ve adapted it for their factory, but all the engineering, dimensions, Bauer is behind it.”

Now, roughly a month into the process, things have really hit a different gear. As of April 21, Bourgeois said his factory has increased its output to 200,000 shields per week. “We are still continuing to receive demand even though we have closed our website [to orders]. We’ve served hospitals, private clinics, police departments, firefighters, pharmacies, senior residence homes, industry, engineering firms and others.”

He said he and his team are on track to meet the company goal of 2.25 million units through the end of May, and beyond May, “We will review the demand and if there are still important needs, we will honour our commitment and we will produce it.”

Bourgeois also announced that in addition to CSA certification, the product is meeting the standards from the American National Standards Institute (ANSI), certified by a third-party lab.

The executive noted that the feedback from the shields has been glowing so far, with customers praising the fit, comfort and protection. “We know how to make [protective] goods, the way we design, we design it not just to protect but to be comfortable. The length of the visor, the way we place our foam, the way we treat our foam, we’ve discovered that it’s probably the best in the market, even compared to medical goods.”

While the experiment has been a success so far, there have been challenges, notably with the firm’s supply chain and getting consistent raw materials.

Bourgeois said, “The majority of goods are sourced in Quebec and also in the U.S. Now we’re facing cross border challenges that we have to monitor. We are also buying international and we have to bring goods in by air. Also, because all of these other companies are making face shields, it’s put a strain on the materials needed.”

He explained that to meet these challenges, the manufacturer adjusted its assembly process. “For example, we received six kinds of elastic bands with different tolerances.”

Also, “We use 3D printing to make the tools, the jig, the work station,” Bourgeois said.

Additionally, the danger of the pandemic itself has forced Bauer to change its process.

Bourgeois said, “We had a conveyor, but now with the new rules of social distancing instead of working on a conveyor and passing pieces to other workers, we decided to work at work stations.” He continued, “The first units we built were for our workers and everybody right now wears a mask and shield and gloves. We really want to make sure that our people are protected. No visitors are allowed in our building.” 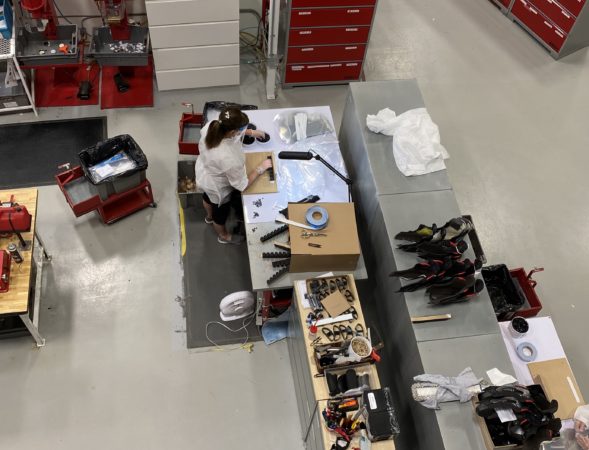 Bauer is using isolated work stations to adhere to social distancing. All workers are wearing PPE as well.

As Bauer continues to turn out an enormous volume of face shields, while dealing with the headaches of manufacturing during a pandemic, one of the most admirable aspects of this initiative is what Bauer isn’t making — a profit. The firm is offering the face shields at cost.

According to Bourgeois, “We want this to be affordable for people. It’s not a game of making money.” Also, “We want our workers to have a job and keep working. We want to do our part. At Bauer, we say ‘everything for the team.’”

All images courtesy of Bauer