Bank of Canada hikes rates to 0.75 per cent

The first increase of the benchmark interest rate in nearly seven years will be closely watched to see how the economy handles increases to the cost of mortgages, credit and other loans linked to the big bank prime rates 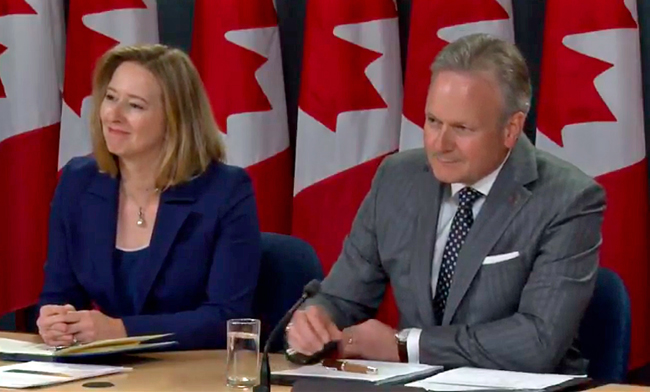 OTTAWA—The Bank of Canada has hiked its benchmark interest rate to 0.75 per cent from 0.5 per cent, its first increase in nearly seven years.

Such a move will increase the costs of mortgages, home equity lines of credit and other loans linked to the big bank prime rates.

The announcement comes following a series of data suggesting the economy started the year on a strong footing.

The Bank of Canada cut interest rates by a quarter of a percentage point twice in 2015 to help the economy deal with a plunge in oil prices, but it said July 12 that the adjustment has been made.

“The very strong growth of the first quarter is expected to moderate over the balance of the year, but remain above potential,” the bank said in a statement.

“Growth is broadening across industries and regions and therefore becoming more sustainable. As the adjustment to lower oil prices is largely complete, both the goods and services sectors are expanding.”

The central bank, which last raised its key interest rate target in September 2010, says that economic growth is broadening across industries and regions and becoming more sustainable even as inflation remains below its two per cent target.

It says the recent softness in inflation is temporary, with the effects of food price competition, electricity rebates in Ontario and changes in automobile pricing expected to fade.

The Bank of Canada said it also anticipates exports to pick up in the coming quarters and make an increasing contribution to growth, while business investment is also expected to rise.

Consumer spending is expected to continue to be a significant contributor to the economy, but the bank said it believes high levels of household debt and a slowdown in the housing market will weigh on spending.

The announcement follows signs that the housing market, a key economic driver in recent years, is adapting to government changes meant to cool the real estate sectors of Toronto and Vancouver and help improve financial stability.

“Looking ahead, residential investment is anticipated to contribute less to overall growth,” the bank said. “Macroprudential and housing policy measures, as well as higher longer-term borrowing costs resulting from the projected gradual rise in global long-term yields, are all expected to weigh on housing expenditures.”

The Bank of Canada’s next scheduled rate announcement is set for Sept. 6.