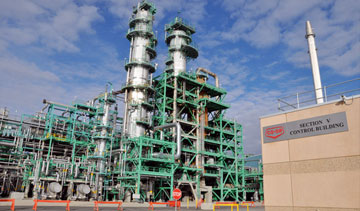 When it opened in 1935, the refinery on the outskirts of Regina, Sask. produced 500 barrels of crude oil per day. PHOTO: Federated Co-operatives Ltd.

REGINA—A worker has been taken to hospital after being injured by scalding liquid at the Co-op oil refinery in Regina.

Co-op spokesman Brad DeLorey says hot diesel sprayed onto the worker’s calves while he was doing an inspection.

The employee’s condition is not known.

DeLorey says there will be an investigation to determine what happened.

The area has been isolated and operations at the refinery have not been affected.

The Co-op refinery was founded in the 1930s, during the Great Depression. The company’s website says eight farmers risked their own money and land to establish a petroleum refinery to supply what was then a very small chain of Saskatchewan farmer-owned gas stations.

That facility went from 500 barrels a day in 1935—barely enough to supply a few gas stations—to today, a major supplier of Western Canada’s fuel needs, producing 130,000 barrels a day.