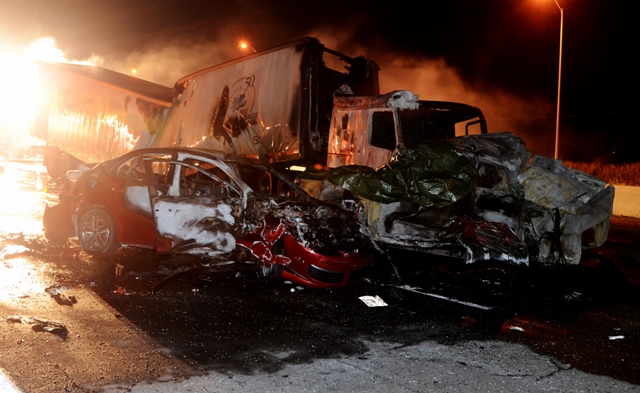 The scene of the accident outside Port Hope, Ont. on Aug. 3. The other two accidents occurred on Highway 401 in Chatham Kent and on Highway 48 near Georgina, Ont. PHOTO: OPP

Police say all three accidents involved a commercial transport truck crashing into the back of traffic that was either stopped or had slowed as a result of construction or a collision ahead.

“This series of horrific collisions is driver inattention at its worst and the most tragic reminder in recent history of the tremendous toll on the lives of innocent citizens when commercial transport truck drivers are not paying full attention to the road,” OPP Commissioner, Vince Hawkes, said in a statement.

Two of the collisions took place on Highway 401—one near Port Hope, the other in Chatham Kent—while the third accident happened on Highway 48 near Georgina, Ont.

Each accident resulted in two deaths in vehicles at the end of the traffic queue, police said. Four men, one woman and a 14-year-old boy were killed in the collisions and several others, including a 10-year-old boy were injured.

Two Brampton residents and one Scarborough, Ont. man are charged with multiple counts, including dangerous driving causing death, causing death by criminal negligence and dangerous operation of a motor vehicle.

Related Stories
OPP to crack down on commercial truckers
Ontario worker killed as crane collapses into pond
Man killed in industrial accident at quarry near Orillia, Ont.
Arrest made after shots fired at trucks on remote B.C. highway