The collision is still under investigation, but police say initial reports indicate a transport truck crashed into slowing traffic, leading to the 14-vehicle pileup 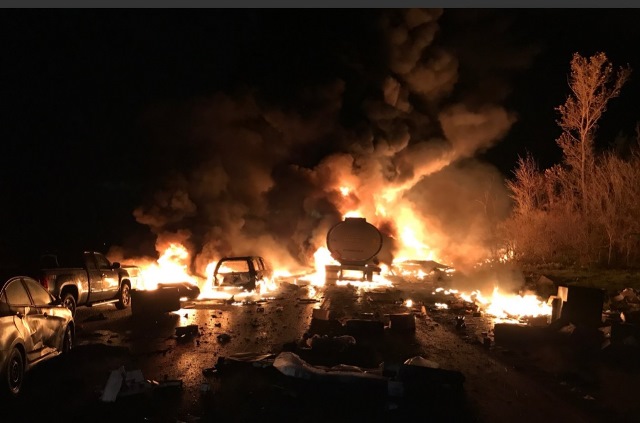 COOKSTOWN, Ont.—At least two people have died in a 14-vehicle pileup that sent a wave of flames down a highway north of Toronto, prompting motorists to run for their lives, Ontario Provincial Police said Nov. 1.

Police said the number of fatalities may rise as they reach more vehicles involved in the fiery crash late Tuesday night on Highway 400 south of Barrie, Ont.

“There are cars everywhere, twisted transport trucks, destroyed vehicles, metal that is unrecognizable as to whether or not it is a vehicle at all or not. And that’s why we’re still looking to determine any other victims that may be inside the vehicles, which we haven’t been able to ascertain at this point,” OPP Sgt. Kerry Schmidt told reporters at the scene.

Schmidt said there’s going to be a lot of work to pull the victims out of the damaged vehicles.

“It’s absolutely devastating and beyond description,” Schmidt said, noting that first responders were shocked by what they found when they arrived.

“It’s one of the worst crashes I’ve ever seen in terms of absolute carnage and destruction,” he said.

Luba Zariczny, 25, said she felt the heat from the flames from the other side of the highway as she drove past the crash on her way home to Mississauga, Ont. She pulled over about 100 metres away and shot video on her phone that shows towering flames and heavy black smoke.

“I felt a lot of heat coming off it and just a lot of cars burnt up and people just off to the side. It looked like some people tried to reverse back and then there was other cars that I could see emergency lights on so they just literally left their cars and ran,” she said.

“The flames is what kind of freaked me out,” she said. “I automatically assumed that there was definitely casualties in there, like fatalities. Just seeing how on a big scale it was, it gets you a little bit.”

Officials said the fatal accident came on the heels of another more minor multi-vehicle collision on the highway.

Heavy traffic from that collision likely set the scene for the more major accident, he said.

Gallant was on the scene of the first collision when he said two fuel tanker trucks and at least three transport trucks collided just before 11:30 p.m. Tuesday, setting off a devastating chain reaction.

“When I looked to the south from the accident I was already on, all I saw was a big ball of fire,” Gallant said.

Schmidt said the crash sent fuel “rolling down the highway.”

“People were running for their lives to not be encompassed by the moving fire that was on the highway,” he said.

Firefighters let the fuel burn itself out before tackling any remaining hot spots and are still at the scene, Schmidt said.

Gallant said his was one of eight fire departments on the scene that helped get the fire largely under control within about two hours.

Paul Novosad, a freelance photographer who observed first responders battling the blaze, counted about 26 fire trucks swarming over the scene in what he described as a well-co-ordinated effort.

“The fire was just spectacular. It kept blowing up, the diesel,” he said. “The heat must have been incredible.”

Police said all lanes of the highway are closed between Country Road 88 and Highway 89 and are expected to remain closed all day Wednesday.

The cause of the collision is still under investigation, but Schmidt said the initial reports indicate that a transport truck may have collided into slowing traffic.

“The sky was clear, it was dark, obviously, at the time … no issues on the road surface for visibility,” Schmidt said, adding police will be looking at possible mechanical issues as well as any possible human factors.

The stretch of the highway where the crash happened has been under construction for months.

The force said it has responded to more than 5,000 such collisions this year, with 67 people killed. In the two previous years, OPP tracked 13,668 crashes involving commercial transport trucks that killed a total of 155 people.

The Ontario Trucking Association said last week that the industry is committed to road safety, noting that there has been a 66 per cent decrease in the fatality rate from large truck collisions between 1995 and 2014 despite a 75 per cent rise in large truck vehicle registrations.

—with files from Paola Loriggio and Michelle McQuigge in Toronto