"It's a bit disturbing to see there has been no improvement in women in our labour force in 30 years,'' said Rhonda Barnet, who chairs the CME national board of directors 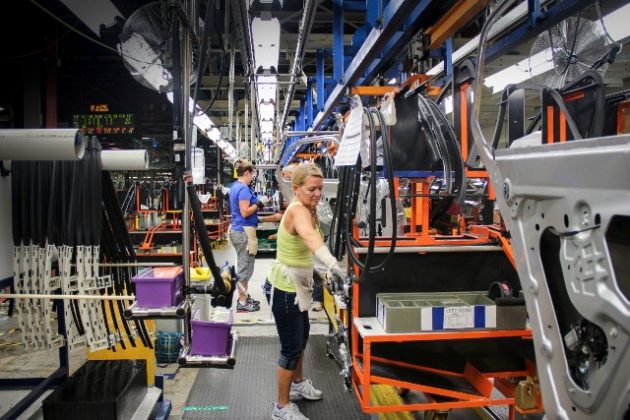 The CME report notes the share of women in manufacturing jobs has been flat since the mid-1980s. PHOTO: GM

OTTAWA—Recruitment efforts to get more women working in manufacturing will fail unless girls get the education and training needed for those jobs, says a new report.

“Businesses are actively looking to recruit more women, but they find that few ever even apply,” said the report released Wednesday by the Canadian Manufacturers & Exporters (CME), a trade and industry association. “The labour pool is simply too small.”

Canada has come a long way when it comes to the number of women at work, as they now make up 48 per cent of the labour force.

That has not been the case for the manufacturing sector, where women hold only 28 per cent of the jobs.

The numbers are worse when it comes to the skilled trades, where the report says women account for just 4.5 per cent of workers.

The report also notes the share of women in manufacturing jobs has been flat since the mid-1980s.

“It’s a bit disturbing to see there has been no improvement in women in our labour force in 30 years, so that was just alarming,” said Rhonda Barnet, who chairs the CME national board of directors.

“What is promising is that when we do attract women, their job satisfaction is high and that they would very much recommend that to someone else,” said Barnet, who is also president and chief operating officer of Steelworks Design Inc. in Cavan Monaghan, Ont.

“Our issue is trying to get them there.”

This gender gap raises some interesting questions about the Liberal government’s major infrastructure program—which calls for $81.2 billion in spending over the next decade _ especially when it comes to employment.

The Liberals have committed to running their proposals through gender-based analysis, which looks at how a certain policy might affect men and women, or boys and girls, in different ways, along with taking age, income, culture, ethnicity and other intersecting factors into account.

Brook Simpson, a spokesman for Infrastructure Minister Amarjeet Sohi, said the under-representation of women in the construction industry is something that came up as the department conducted its gender-based analysis of the infrastructure program.

“We are working with other departments … in order to encourage more women to work in construction,” Simpson said.

To figure out what is getting in the way, the trade association teamed up with some other companies and groups to survey people currently working in manufacturing jobs.

The online survey conducted between Aug. 30 and Sept. 28 received 826 responses, including from 640 women.

The Marketing Research and Intelligence Association, which is the professional body of the polling industry, says online surveys cannot be assigned a margin of error because they not randomly sample the population.

The most obvious issue that came up is the fact that since males dominate the workforce, they also dominate the culture.

“The existing gender imbalance discourages women from considering a career in manufacturing,” said the report. “That creates a self-perpetuating cycle whereby women avoid manufacturing jobs because there are not enough women in manufacturing.”

Meanwhile, the vast majority of the small number of men who completed the survey said they believe men and women are treated equally at work.

“The fact that men do not see a problem is itself part of the problem,” said the report.

It seems one of the biggest obstacles is the shortage of women getting education and skills training for these jobs, which creates a vicious cycle.

Statistics Canada publishes gender-segregated data on the number of new registrations in apprenticeship programs, which paint a stark picture.

The report calls on companies and governments to improve their efforts to encourage young girls to seek education in the skilled trades or STEM (science, technology, engineering and mathematics) fields.

“We know that if we wait too long, the doors close,” said Barnet.