FCA to lay off 1,300 workers at Sterling Heights plant

The automaker, which will furlough the second shift on July 5, is having trouble selling its Chrysler 200 sedan 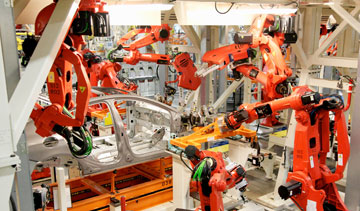 DETROIT—Tumbling sales of Fiat Chrysler’s main midsize car have driven the company to indefinitely lay off 1,300 employees at a Detroit-area factory.

Workers on the second shift at Fiat Chrysler’s assembly plant in Sterling Heights, Mich., will be furloughed starting July 5 as the slow-selling Chrysler 200 has started to stack up on dealer lots.

Sales of the cars were down 61 per cent through March, and inventory grew to a 150-day supply, according to Ward’s Automotive. Automakers consider 60 days to be optimal to give dealers enough of a selection for customers. Fiat Chrysler sold only 7,500 of the cars last month, less than half the number it sold a year ago.

It’s the company’s first indefinite layoff since 2009, when demand for cars and trucks dropped coming out of the Great Recession, and it’s caused in part by U.S. buyers shifting from cars to SUVs of all sizes. Midsize cars, which have been particularly hard hit by the shift, saw sales fall 3.5 per cent for the first three months of the year.

But the 200 had other problems including poor reviews due to unresponsive handling, a rough-shifting transmission and a four-cylinder base engine that didn’t have enough power. “Every other sedan in this category is better,” Consumer Reports magazine said two years ago.

Even Fiat Chrysler CEO Sergio Marchionne criticized the car at this year’s Detroit auto show, saying it had a bad rear-door design that was copied from Hyundai’s Sonata. Marchionne said later in January that FCA wants to find a partner to build small cars like the Dodge Dart and Chrysler 200 so it can make more hot-selling Jeeps at its U.S. plants. He wouldn’t say which factories would get more Jeeps, but last year’s UAW contract promised new vehicles for the Sterling Heights and Belvidere, Illinois factories.

The union said April 6 that the layoffs weren’t a surprise and that FCA wasn’t the only company having trouble selling cars. It said FCA plans to build more trucks and SUVs, which will be positive for union members in the long-term.

Fiat Chrysler says the second shift in Sterling Heights, which has been on temporary layoff since Feb. 1, will return to work Monday and be on the job through July 5. But after that, workers will be laid off indefinitely.

The company notified employees represented by the United Auto Workers union of the decision on Wednesday, as well as state and city officials, FCA said in a statement. Fiat Chrysler said it will place the laid-off workers in open full-time positions as they become available in the Detroit area.