The captain of the twin-engine plane has a blood-alcohol level of 0.24 per cent, a Transportation Safety Board investigation found. The agency says industry self-policing has not worked and says pilots should be tested for alcohol and drug use 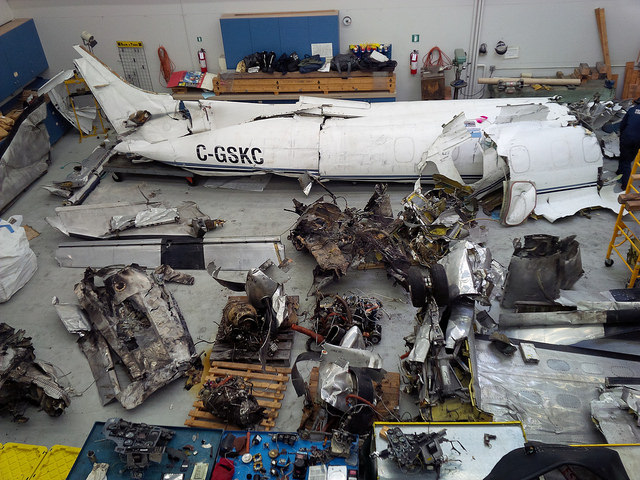 VANCOUVER—The airline industry and Transport Canada should develop a program requiring pilots to be tested for drugs and alcohol, the Transportation Safety Board said Nov. 2 after releasing a report into a crash that killed two people.

Board chairwoman Kathy Fox called on both sides to work with employee representatives to implement a program that would protect public safety. She added that self-policing by the industry has not worked, so the issue of impairment will continue to go unrecognized and unreported.

“What’s needed is something more, especially for safety-sensitive positions where, to be plain, people’s lives could be at stake,” she told a news conference.

“Alcohol impairment almost certainly played a role,” Fox said of the cargo plane crash on April 13, 2015, in the mountains north of Vancouver.

Four other fatal crashes since 2009, three involving commercial operators, had drugs or alcohol as a contributing factor, said Fox, who added it was time to learn lessons from the latest disaster.

The BC Coroners Service had reported that pilot Robert Brandt had a blood-alcohol level of 0.24 per cent, or three times the legal limit for driving.

Brandt, 34, was captain of the twin-engine Swearingen cargo aircraft operated by Carson Air. First officer Kevin Wang, 32, also died, but did not have any drugs or alcohol in his system.

Other countries, including the United States and Australia, have found mandatory drug and alcohol testing are most effective along with education, employee assistance programs, rehabilitation, return-to-duty programs and peer support, Fox said.

The safety board said the crew did not declare an emergency before the aircraft dropped to 900 metres from 2,400 metres in less than 20 seconds.

The agency was unable to confirm why the aircraft entered a steep dive and broke apart mid-air, Fox said.

“This is not satisfying to the TSB, certainly not for the families involved and not to Canadians who have come to rely on one of the safest transportation systems in the world.”

Jason Kobi, the investigator in charge, said the aircraft disappeared from radar 80 seconds after the pilots’ final contact with air-traffic control.

There was no cockpit voice recorder or flight data recorder on board, and the lack of hard data significantly undermined the investigation, Kobi said.

Investigators found the aircraft entered a steep dive and accelerated to a high speed that exceeded its structural limits and caused it to break apart before crashing, he said. Debris scattered over a wide area.

“But the question remained: Why? Unfortunately, we were never able to determine this with certainty.”

Kobi said the pilot’s high blood-alcohol content was one possibility, because it meant his physical and mental performance would have been impaired and he could have lost consciousness.

“Even if the captain, had been, for example, slumped forward toward the controls we found no indication that the first officer was incapacitated and he should still have been able to regain control of the aircraft.”

It’s also possible heaters that provide air speed information were off or malfunctioned or that the aircraft was intentionally placed into a steep dive, with several factors suggesting that could have been the case, Kobi said.

They include the duration of the dive, absence of any emergency communication and the lack of recovery efforts when the plane started to descend rapidly.

Other possible coincidental factors have been identified, including physical indications that the pilot had a history of heavy alcohol use and “the fact that there is a significant relationship between alcohol use and suicidal behaviour,” Kobi said.

“Those several coincidental factors were present (but) the investigation could not conclude anything about the captain’s predisposition to commit an intentional act.”