The statement, which one critic described as "blatantly untrue," is the latest in a series of comments the energy secretary has made in defense of oil, coal and natural gas 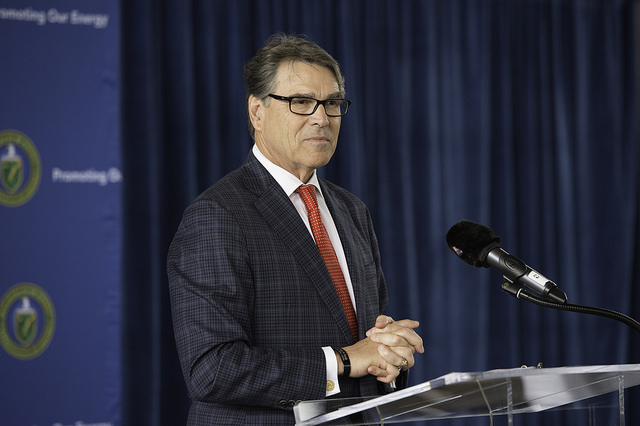 Perry caught flak from the scientific community, among others, earlier this year for saying carbon dioxide is not the main cause of climate change. PHOTO: Charles Watkins/DOE

Perry said Nov. 2 that using fossil fuels to power electricity can help villages in Africa and other developing regions. He said during a recent visit to Africa, a young girl told him electricity was important to her because she has to read by the light of a fire with noxious fumes.

Speaking at an event sponsored by Axios and NBC News, Perry said electricity also was important “from the standpoint of sexual assault. When the lights are on, when you have light that shines the righteousness, if you will, on those types of acts.”

From the standpoint “of how you really affect people’s lives, fossil fuels … play a role in that,” Perry said. “I happen to think it’s going to play a positive role.”

Perry’s remark comes amid an uproar over sexual-assault allegations against film mogul Harvey Weinstein that has spread to other industries and politics.

Perry has been challenging what he calls an inaccurate narrative pushed by environmentalists that fossil fuels are harmful because they contribute to climate change. He says fossil fuels such as oil, coal and natural gas foster economic development and jobs and are an important strategic asset for the United States.

Perry and President Donald Trump are promoting increased domestic energy production as part of a strategy to achieve U.S. “energy dominance” in the global market.

“It was already clear that Rick Perry is unfit to lead the Department of Energy, but to suggest that fossil fuel development will decrease sexual assault is not only blatantly untrue, it is an inexcusable attempt to minimize a serious and pervasive issue,” Brune said in a statement.

“Women, and particularly women of colour, are among the most severely impacted by the climate crisis, and it is these same communities that are most at risk of sexual assault,” Brune said.

Perry’s office did not immediately respond to requests for comment.