Honda looks to suck in buyers with new vacuum-equipped Odyssey

MARKHAM, Ont.—With crossovers and SUVs dominating suburban driveways, it’s safe to say the Canadian minivan market ain’t what it used to be.

In the face of that declining demand for the plus-sized people movers, Honda Canada Inc. is hoping to suck up a bigger portion of its market share for the segment with an integrated vacuum in the 2014 edition of its Odyssey minivan, an industry first, according to the automaker.

Launched this week at dealerships across the country, the mildly updated Odyssey gets its biggest change in the drivetrain department, with the addition of a standard six-speed automatic transmission.

The new transmission is paired to the automaker’s 3.5-litre V-6 engine, together delivering an estimated fuel consumption rating of 10.9L/100 kilometres in the city and 7.1L/100 kilometres on the highway.

Also added to the Odyssey stable for 2014 is the Canadian exclusive SE model, which builds on the van’s base LX model to include eight-passenger seating, 17-inch aluminum wheels and a removable front centre console.

Honda is also offering a host of available technology features in the 2014 Odyssey, including its exclusive LaneWatch blind spot display, and forward collision and lane departure warning systems. 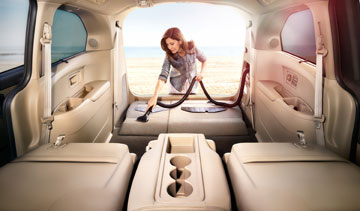 But perhaps the biggest game-changing feature—or at least the neatest—in the minivan is Honda’s new HondaVAC, the world’s first in-vehicle vacuum cleaner.
Standard on the top-of-the-line Touring model, the HondaVAC system is an integrated vacuum cleaner in the rear cargo area of the van that comes with a hose long enough to reach the dashboard.

HondaVAC runs up to eight minutes with the ignition turned to the accessory setting or continuously if the engine is running, according to the Automaker.

The Odyssey is built in Alabama.