Built for the U.S. Dept. of Defense's research wing, the "Phantom Express" will be designed to autonomously fly satellites into low Earth orbit, setting up a potential clash with private companies already operating in the space 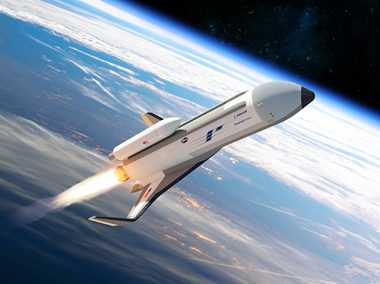 The experimental spaceplane would reach the edge of space before deploying an expendable second stage and returning to Earth. PHOTO: Boeing

ARLINGTON, Va.—On a partly-cloudy afternoon in early July 2011, Space Shuttle Atlantis blasted off from Kennedy Space Center en route to the International Space Station. It returned from low Earth orbit a dozen days later, officially bringing an end to NASA’s reusable spacecraft program and prompting a flurry of questions about the future of space travel—in particular, what role the U.S. government would play.

Six years later, many of those questions remain unanswered, but a new space race is already well underway as private companies vie for supremacy in the battle for satellite launch contracts and push toward making space tourism a reality.

With NASA focused on probing distant planets and preparing for a possible moonshot for Mars, the U.S. Defense Advanced Research Projects Agency—better known as DARPA—is looking to pick up some of the slack when it comes to firing objects into low earth orbit.

Earlier this week, the experimental research wing of the U.S. Department of Defense said it will partner with Boeing Co. to build a new spaceplane known as the Phantom Express, or XS-1.

“Phantom Express is designed to disrupt and transform the satellite launch process as we know it today, creating a new, on-demand space-launch capability that can be achieved more affordably and with less risk,” Darryl Davis, president of Boeing Phantom Works, said in a statement.

The XS-1 will be entirely autonomous and be capable of reaching the edge of space carrying a relatively small satellite. Once in the upper reaches of the atmosphere, the spaceplane would deploy a second, disposable stage that would launch the satellite into orbit. The Phantom Express, meanwhile, would return to Earth and land on a runway, as the Space Shuttle did in the past.

DARPA said the experimental flyer is designed to take off vertically like conventional rockets, but cost significantly less. It’s aiming for each launch to cost no more than US$5 million—a small fraction of the cost the U.S. military currently pays for similarly-sized payloads.

The design plans include lightweight composite cryogenic tanks to hold the spaceplane’s liquid oxygen and liquid hydrogen fuel and composite metallic wings capable of standing up to the strains of hypersonic flight. It would use a new version of the AR-22 engine, which was used to power the Space Shuttle.

Though the agency’s main goal is military security, it noted the commercial market could also benefit from the advancement in technology.

The project could set up a potential clash with companies already operating in the space, such as Elon Musk’s SpaceX. Other less-established companies could also be impacted. Just this week, New Zealand-American start-up Rocket Lab fired off a test rocket designed to do much the same thing as the new DARPA project; Rocket Lab aims to fire small satellites into orbit for no more than $5 million.

Boeing plans to have a demonstration model of the spaceplane ready for 2019.