SES will deploy its Sexbomb lift body aircraft from a stratospheric balloon that lifts it to 110,000 ft. 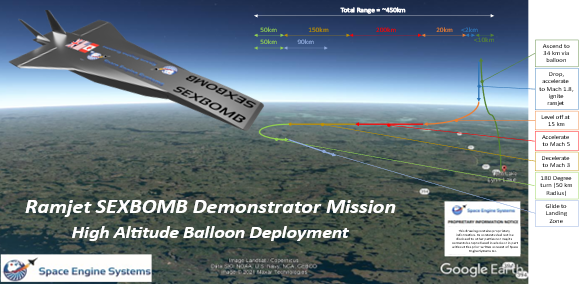 EDMONTON — Regulations can be a challenge for high altitude and supersonic innovation in aerospace. SES thought it would need to go to the U.S. or the U.K. to test its DASS ram jet engine. But now SES is teaming with Lynn Lake Airport in northern Manitoba to demonstrate its proprietary technology in flight.

“We look forward to working with Transport Canada to get the regulatory approvals for flight this year!” said Pradeep Dass, President & CTO, Space Engine Systems.

SES will deploy its Sexbomb lift body aircraft from a stratospheric balloon that lifts it to 110,000 ft. It will free fall to Mach 1.8 where the DASS engine ram jet fires to take it to Mach 5 at 57,000 ft over the northern barren lands, before gliding back to Lynn Lake.

Subsequent testing will use the self launching Hello 1 – Experimental in standard horizontal take-off and landing, towards reaching low earth orbit with the prototype Hello-1, delivering payloads at the lowest cost per kg of all the current space services.

The Hello-1 can purportedly deliver human organs for life-saving transplants from Toronto to Edmonton in 30 minutes. SES is targeting crewed missions by 2025 at costs a third of space tourism so that more Canadians will be able to join the ranks of other astronauts.