Too little, too late? The devastating consequences of natural disasters must inform building codes

The retrofitting of existing structures and the enforcement of building standards is the biggest challenge for local and federal governments in North America. 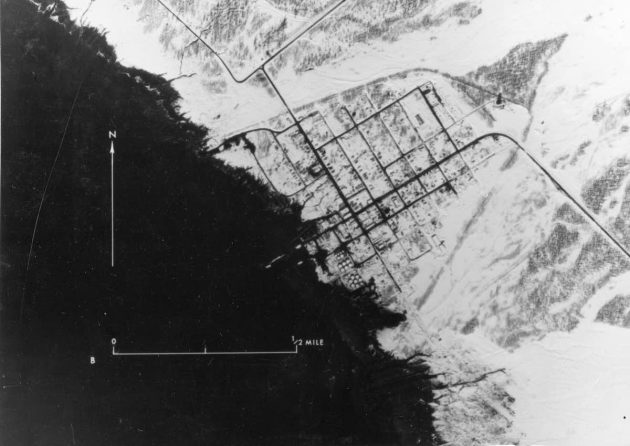 Aerial photograph of Valdez showing complete destruction on shoreline, harbour and pier facilities after the 1964 earthquake in Alaska. (U.S. Coast and Geodetic Survey)

Steady population growth and the accompanying rise in urban density increases the risk to human life and damage to property caused by natural disasters. In 2017, the U.S. Federal Emergency Management Agency (FEMA) estimated the annual cost of earthquake damage in the United States was US$6.1 billion.

Building codes are not retroactive, which means that buildings need only comply with the codes that were in effect at the time of their design and construction. The retrofitting of existing structures and the enforcement of building standards is the biggest challenge for local and federal governments in North America.

Earthquakes have posed a major threat to infrastructure. Damage caused by earthquakes has led to the development and evolution of building codes designed to withstand or minimize damage to buildings. This is known as seismic design, and takes into consideration the magnitude and frequency of earthquakes in a particular region.

However, as building codes are often implemented for new buildings designed after an event occurs and do not apply to existing buildings, building code updates can feel like too little, too late.

Modern building standards in Canada and the U.S. are issued by the National Research Council Canada (NRC) and the American Society of Civil Engineers, respectively. They prescribe detailed guidelines for the assessment, design and construction of resilient infrastructure, reflecting the most recent know-how on engineering seismology and design practice.

In 1906, an earthquake struck San Francisco causing 3,000 deaths and US$10.5 billion in damage. This event motivated research on earthquakes in the U.S., and set the ground for the introduction of the Uniform Building Code in 1927, but these guidelines were not mandatory.

The 1933 Long Beach earthquake — with a magnitude of 6.4, causing 115 deaths and US$819 million in losses — exposed the increased vulnerability of schools, and was the reason why the seismic design of schools and buildings became mandatory in California.

At the time, federal agencies were reluctant to design earthquake-proof structures where earthquakes were unknown to occur. In 1935, the Uniform Building Code adapted a map that divided the U.S. in four seismic zones where earthquakes had a similar likelihood of occurrence. The buildings sited on each zone were designed for seismic forces defined as a small percentage of the structural weight, varying from two per cent (low seismicity) to four per cent (high seismicity).

The great Alaskan earthquake in 1964 — magnitude 9.2, 131 deaths, US$2.6 billion in losses — captured the attention of the U.S. Geological Survey (USGS) science bureau, which revised the existing seismic hazard map in 1969. The main revisions concerned the central and eastern zones, where the expected seismic intensity was increased significantly.

The 1971 San Fernando earthquake — magnitude 6.6, 66 deaths, US$3.3 billion in losses — caused the collapse of critical facilities and motivated USGS to propose a new, probabilistic seismic map in 1976, which associated the hazard from earthquakes to levels of ground-shaking that were expected to occur in particular locations over time.

In 1977, FEMA, USGS, the National Institute of Standards and Technology and the National Science Foundation joined forces under the National Earthquake Hazards Reduction Program to promote research in engineering seismology, incorporate the latest knowledge in earthquake design and construction into the codes, and reduce the nation’s seismic vulnerability.

The 1989 Loma Prieta and the 1994 Northridge earthquakes in California revealed gaps in seismic design.

The International Code Council merged these regional codes into a single set of national building codes in 1994 to reduce the cost and complexity of building construction.

Following the 1941 edition, buildings were designed for seismic forces, a design approach similar to the one prescribed in the 1927 version of the Uniform Building Code. In Canada, earthquakes occur along the West Coast, in the Cordillera, High Arctic, Eastern Canada and along the eastern seaboard. The first seismic zoning map was introduced in the 1953 edition of the code.

The new hazard model incorporated new earthquake models and the new hazard data. Buildings in Canada are now designed for earthquakes that have a two per cent probability of recurring in 50 years.

As extreme weather events due to climate change start to occur in areas where they were not known to happen before, the retrofitting of existing public and private infrastructure is essential for our resilience.

Retrofitting existing structures and enforcing building standards are the biggest challenges for local and federal governments in Canada and the U.S. Nearly half of all Americans are exposed to significant earthquake risk, with annual losses due to earthquakes estimated at US$4.4 billion.

The risk to human life and property will continue to grow, disproportionately affecting the most marginalized and vulnerable, if these infrastructure weaknesses are not fixed.