The first U.S. presidential debate was pure chaos: Thoughts from The Conversation

Amid the chaos, Trump and Biden did address some key questions in the presidential race 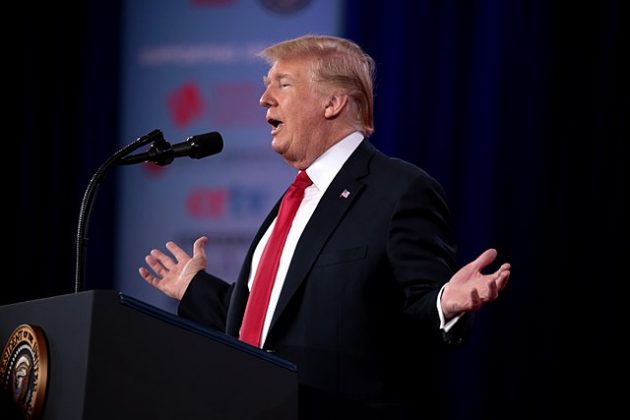 Trump was combative during the debate, continually interrupting Biden — and the moderator PHOTO: Gage Skidmore/Flickr

“I hate to raise my voice, but why should I be any different from the two of you,” he admonished the candidates, though he was probably speaking more to Trump, who interrupted both Wallace and Biden repeatedly during the debate.

Amid the chaos, Trump and Biden did address some key questions in the presidential race on issues like COVID-19, racial justice, the economy, public safety, the Supreme Court, climate change and, of course, Trump’s taxes.

The Conversation’s experts were watching the debate in Australia and the US. Here’s what they thought of the night.

In the 2016 election between Donald Trump and Hillary Clinton, many conventional analysts — as well as Clinton supporters — said it was clear the former secretary of state had won each one of their debates.

Clinton, they posited, provided strong data points and policy analysis that made clear she was more presidential and appropriate for the job.

Trump supporters, on the other hand, argued it was undeniable he had, in fact, won the debates because he ridiculed and mocked Clinton in a way that she deserved.

The Clinton-Trump debates in 2016 were like Rorschach tests — your perception of them depended on your opinion of the candidates.

Four years later, there appears to be more consensus about the clear winner of the first debate between Trump and Biden: chaos.

With countless interruptions, personal attacks and name calling, some have already called it the worst debate they’ve ever seen.

But the debate, in many ways, mirrors where America is right now: this is perhaps the worst political climate the country has seen in modern history. People are angry and using raised voices while refusing to agree upon a basic set of facts.

The ultimate question, however, is whether this will change any opinions of US voters. Nearly 90% of voters came into the debate saying their minds were already made up about who they will be voting for. Many voters have, in fact, already submitted their ballots.

But given Trump’s 2016 victory was ultimately reliant on a margin of fewer than 80,000 votes across Michigan, Pennsylvania and Wisconsin, even the smallest of advantages could prove critical in the election.

Initial polling conducted after the debate indicated Biden may have won a slim advantage over Trump. What is much clearer, however, is who lost: US voters.

The debate reminded me of the absurd denouement to Rocky II. After a bruising encounter, both men are floored. The fighter that gets up first is the winner.

Except with the debate in Cleveland today, neither Trump nor Biden rose from the canvas. Each spent 90 minutes trying to drag the other down.

There were moments when Biden staggered to his feet, looked down the camera lens and called for a return to normalcy. But he kept being pulled back into the scrap by Trump, who was determined to play to his base.

Neither won. Neither lost. On that basis, Biden had the slightly better result. He did not live down to Trump’s caricature of him as a doddering, old man. We know what Trump is — love him or hate him — and saw that again tonight.

Biden’s job was to present a sane alternative. He only partly succeeded.

Ponder how remarkable a scene this was: the most divisive and controversial president in modern American history, who has presided over the deaths of 200,000 Americans from COVID-19 and the eruption of several cities into violent protests, and the only politician deemed capable by the Democrats of removing him is Joe Biden.

The debate reminds us how blessed Trump has been by his opponents. He was facing not a man at the peak of his powers, but a compromise candidate of a deeply divided Democratic party.

Trump scored points by hammering away at the “radical left socialists” that would, he claimed, run the Biden administration. Biden had no killer response to this line of attack.

Swing voters know what Trump is. But doubts about the ideological momentum of a Biden White House endure. The small number of undecided voters may well back the devil they know. If they do, Trump wins.

The Biden camp is pinning much on the growing exasperation with Trump — and a basic human desire to feel normal again — to get them over the line.

That strategy just about held together in the first debate. Offered every opportunity to be statesmanlike, Trump kept aiming low. He maintained his notorious authenticity by doing so.

But Americans have had nearly four years of this act. Biden did, imperfectly, make clear there is an alternative style of political discourse on offer. He’s no Rocky Balboa. But, like Rocky, he will get to fight another day.

After an awkward entrance, devoid of the usual handshake thanks to COVID-19, the first question — about Supreme Court nominee Amy Coney Barrett — launched both candidates into a competition of who could talk loudest over the other.

Trump won and continued to interject so frequently that the few uninterrupted sentences of Biden or Wallace stood out conspicuously.

While the messiness of the debate and the frequent inability of the moderator to control the participants were extreme, they were expected given our experience with Trump in the 2016 debates.

Less expected was a full 15 minutes dedicated to the legitimacy of the vote count. Because elections in the US are very decentralised, with over 3,000 counties administering a single presidential election, systematic fraud at a national level is unlikely.

In the past, few have questioned certified presidential election results — even in 2000 (and other years) when the popular vote and Electoral College result conflicted.

Trump has turned that on its head.

Perhaps predictably, Biden took the high road: urging people to vote, downplaying concerns about fraud and pledging to accept the result, whatever it may be.

Biden made clear that voting by mail is nothing new, dating back the Civil War. (Indeed, overseas voters have used the federal write-in absentee ballot successfully for decades.)

Trump, on the other hand, raised his grievances about the “crooked” 2016 election, before turning to his favoured line about mail-in ballots.

As is so often the case, Trump’s comments mangled real issues relating to mail-in voting and jumbled it with a lot of speculation and confusion about ballots in creeks or wastepaper baskets.

Among the jumble of words, he made reference to one of the issues that does threaten to loom large. In 2016, 1% of absentee ballots that were otherwise correctly marked were rejected for technical reasons, most often because the signature on file with the election administration was not a match with the one on the ballot, or the ballot arrived too late.

In 2020, with a host of first-time vote-by-mail voters, this rate could be higher and even exceed the vote margin between the candidates in some key states. Lawsuits will no doubt follow.

Although Trump’s utterances about a “rigged” election and cheating are worrying, they are unlikely to shift public opinion. So much of what we saw on display today we have heard before, in an even more alarming form, at Trump’s recent rallies.

While we hope for a decisive outcome one way or the other, election officials are bracing themselves.